Today we woke up early to prepare for a hell hike of 3 hours to the isolated, indigenous pueblo of San Martin. We hoofed it over to Porto Nariño from our Cabañas, about a 15 minute hike compared to a 3 or 4 minute boat ride. All 3 of use were dressed a little ridiculously and stereotypically for safari with cargo pants, long sleeved safari shirts and safari hats. I’m sure we looked like we’re headed to an expedition in the outer, unexplored regions of Africa.

Our guide showed up in tank top, shorts and mud boots and you can feel the locals stare as we passed by…Turistas!!

We were toting camera gear so I’d worked up a sweat and was exhausted already by the time we hit town.

At breakfast I saw a man, looks like a local, being toted in a stretcher to the infirmary. He’s not moving and his hand is over his head in what looks like severe pain. “The last person who hiked the trail” I joke. No one laughed.

After breakfast we stocked up on water and to our dismay, no food. There is not a sandwich to be bought anywhere in town to take for the 6 hour round trip journey so we buy raw fruit and bread, hoping that will get us through the brutal hike and back.

Starting off it was cool, lots of foot traffic along the path as it gradually gives way from a concrete sidewalk to dirt path. I noticed everyone on the path, be they young kids or old grandmothers are toting machetes. Luckily our guide, Witman had his own machete in hand.

We were carrying camera gear and though we tried to lighten our loads as much as possible, I realized too late that my trusty laptop was secured in the camera bag, so we’re carrying around needless 3 or 4 additional pounds,  and risking a computer in the Amazon. Agghhh!

The hike was pretty uneventful at first; we met a volunteer machete road crew clearing the path around the road. They offered us some kind of alcoholic refreshment from a 2 litter coke bottle and I am the only one who decided to brave a swig. It was tart, not too bad though. They ask for a donation and I threw them one before we all head on again.

We encountered a small, poisonous snake, a couple of frogs, a tarantula, a few lizards and hosts of wild ass sounding birds along the way. About half way to San Martin we encounter a beautiful clearing where a small finca had been built and some people were gathering water and going about their daily lives.

After that, things got much more intense. The trail began to disappear before our very eyes and we are balancing ourselves as we crossed creeks and ditches on top of felled trees. This might work fine if your barefoot but if you are wearing work boots with equipment strapped to your back, the algae acts like a lubricant and we came very, very close to dumping ourselves as well as some valuable equipment (including this computer) into swamps and creeks along the way.

The final hour of the hike was absolute hell. Renzo, still recovering from back to back illnesses was bringing up the rear. We were going through water like crazy (15 bottles among 4 people) and yet no one has to relieve themselves.  We were soaking wet top and bottom so we were sweating out fluids as soon as we put them in.

One hassle that could have made life worse that didn’t were hordes of mosquitoes. Thankfully, the combo of our external repellents and the oral repellent seemed to be doing the trick.

FINALLY we come to a large clearing and a steep bank overlooking a creek with kids swimming and homemade wooden canoes docked on the side. It was San Martin! We were so tired we didn’t really feel like celebrating… instead I’m sure we were all thinking  “there is no way I’m making that hike back” (I know I was).

It was 12 noon and we would have to start hiking back by 1pm if we were to beat the darkness and no one, especially our guide, wanted to be out on that path in the middle of the Amazon in anything approaching darkness. There was no way that would be an option.

Hiking back in less than an hour seemed like a horrifying idea. We went ahead and shot some video diary footage overlooking the river and then one little girl of 6 or 7 paddled a canoe over for us to use. The kids were all swimming and soaking wet. They were shy but eager to pose for the camera. They were incredibly cute, with one little boy completely naked and his hair bleached blond by the constant exposure to the sun.

As we crossed over I noticed a boat with an outboard motor docked. I ask our guide if there is any chance we could take a boat back instead of hike. He seemed to think that was a realistic idea and said he’d ask the owner.

The owner was a solar panel installer who had made the trip to San Martin to replace the town’s solar panels, which need replacing every 15 years or so!

Turns out San Martin was not exactly what we expected. We expected indigenous people, some in traditional garb and living in huts. Instead everyone was dressed in t-shirts, jeans, shorts or work pants and either barefoot, boots or chancletas. There was a school, electricity, a church and even a store that sold soda (but no water, they use rainwater).

We toured the city, pick up b-roll with our cameras and do a few stand-ups though I can barely think straight and I’m pretty sure I look like hell, but I was so tired, I just didn’t care. We ate our fruit and bread, polished off our last bit of water and to our collective delight were told we could catch a 40 minute ride in the boat for just 40,000 pesos (about $20). 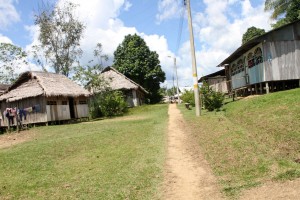 Let’s see a 3 hour hell hike back with no water, no food and darkness approaching or a 40 minute boat ride back for $20?! Yep, I am not ashamed to say we took the boat ride.  Luckily for us we hit San Martin on the one day in 15 years that solar panels were being replaced I guess!

We made it back to Puerto Nariño in time to have a very late lunch. Incredible. The cold shower at the cabaña never felt so good and we all drifted off for naps before a big rainstorm hit and we waited it out before heading to Puerto Nariño for dinner. There would be no night out on the town this night. Just the sleep of the dead.