In case you don’t know them, World Vision (or Vision Mundial as it is known in Latin America) is one of the world’s premiere charitable organizations. They work closely with kids and families in the U.S. and in almost 100 impoverished and developing countries to help them break the devastating and tragic cycle of poverty.

Back in December, when we were shooting our first episode of Raw Travel for Colombia, I had the pleasure of touring their Bogota office and interviewing Edgar Florez, National Director of World Vision Colombia.

More recently, I had the honor and privilege of witnessing World Vision in action. Their dedicated army of staff and volunteers registered kids and families in one of the poorest neighborhoods in Medellin, Colombia, Comuna Ocho (Community 8).  My cameraman for the day, Raul, a U.S. born Colombian-American now living in Medellin picked me up at 6:30AM (evidently volunteering requires getting up early), to meet with Myriam, World Vision’s Regional Coordinator for Medellin.

We were joined by Edgar (not Edgar Florez), a U.S. educated Colombian and extremely experienced translator who regularly volunteers his services for World Vision.  Though Raul speaks fluent Spanish and English and Myriam could understand English, it was a great comfort not to have to rely on my cave man Spanish the entire day.

After a short meeting at their offices, we had a delicious, typical Colombian breakfast and headed over by taxi to Comuna 8.  Comuna 8 is on the outskirts of Medellin, way up in top of the mountains. The view is absolutely incredible and airplanes from the airport were actually flying below us!

Unfortunately the incredible views, views that in the U.S. would be reserved for the wealthiest, were offset by the fact that Comuna 8 is controlled by Gangs (there are still over 250 currently active in Medellin)and crippling poverty.

What does this mean for the citizens and visitors of Comuna 8? Well for us, as visitors, it meant we’d have to wear World Vision Shirts in plain view and our taxi driver would have to obtain permission for us to visit and prominently display a “Volunteer” tag on his windshield.

For people doing business in Comuna 8 (bus companies, food and beverage suppliers, etc.) it means they have to pay “fees” to each gang that happens to control the particular area they work in. But it’s the residents that pay the heaviest price, they pay weekly “protection” fees to their respective gang “landlord” and have restricted movement during certain hours. 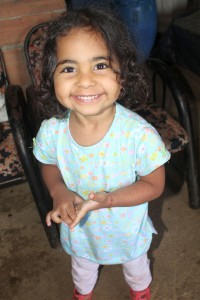 While we were there, there was little evidence of this oppression or even evidence of gangs, other than we were told when and where we could safely pull out the camera to shoot. Also someone pointed out graffiti that marked a particular gang’s territory. We learned that we’d need to leave before 4PM because even the residents risk personal safety if they venture outside of their block after 4pm.

Someone also pointed out to me the infamous “borrachero” tree that grows wild all over Colombia and creates scopolamine, the “zombie” drug, sometimes used by criminals to rob or rape unsuspecting victims. They assured me the flowers from the tree itself were perfectly safe and naturally occurring all over Colombia.  I must point out that while this drug is a real threat and no urban myth, I have never, ever had any personal safety issues when visiting Colombia.  Common sense goes a long way all over the world it seems.

During our tour, every time I saw a young boy of 9, 10 or 11 (some smoking cigarettes) , I couldn’t help but wonder if they were destined for a life in the gang or could an organization like World Vision have an impact on this kid’s life? I was told later that the gangs often use young kids around this age as mules to hide their drugs and guns, correctly believing they’d be less suspicious to any authorities when the crackdowns and raids in these barrios occur.

World Vision works in partnership with the community, enlisting many volunteers who live there locally.  Without this partnership it would be impossible to operate effectively and help the children and their families.

Myriam recruited one of World Vision’s local volunteers who lived in the neighborhood to show us around and tour the barrio, thus ensuring our safety and ability to shoot our cameras uninhibited.

We shot a lot of great footage as many families invited us into their homes to see how they lived. One family had just delivered days old twin babies. When I walked in the father was giving one a bath while the mother was drying the other off and the adorable sister not so shyly watched us.

I was moved by the tenderness of the father. Myriam informed me she considered him a model father. I later decided I wanted to become a “Sponsor” for these twins (less than $20 a month each). They clearly had the love, now they just need a little money.  I think it’s going to be a pleasure to see them grow up and develop the next 15-20 years of our respective lives.

I can’t wait to visit them as they get older and help them in any way I can, but I can’t help wondering about all the other kids without sponsors. Is it right that some win “the lottery” and others don’t? I’ve learned a lot about effectively helping impoverished people, especially after reading a great book called “The Life You Can Save” by Peter Singer. We simply cannot wait for the perfect opportunity to save everyone or nothing will ever happen. 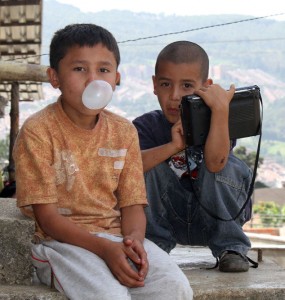 But if those who can (i.e. most people who will read this) will simply try to save someone, then the worst poverty on the planet can actually be eradicated in a matter of years, not centuries.  Wow, think about a world without poverty? What are the possibilities for us all then?

Thanks to Billionaires like Bill Gates, Warren Buffet and millions of other “regular folks” things are changing. But everyday that we wait, tens of thousands of children die of easily treatable and preventable disease. While the U.S. does contribute greatly to charities, the vast majority of donations go to philanthropic organizations right here in the U.S. (often to local art organizations like the local symphony or museum, certainly not to actual starving people).

Our foreign aid tax dollars don’t  go to the poorest countries on the planet either. They go to our allies in the war on terror and to places like Iraq and Afghanistan for political purposes, even though this gets lumped in and counted as humanitarian aid.

In other words, while the U.S., on the surface, seems to be a generous nation when you really analyze it, we are quite selfish. We spend a tiny, tiny percentage of our income and most of that ends up where it is needed least, in the U.S.

We have to ask ourselves “are U.S. lives worth more than others”? What is the cost of saving a U.S. life (estimates are in the millions) versus someone in the worlds’ poorest countries (in the thousands or even hundreds)? Even less expensive is bettering the lives of those in the poorest nations. For example, just $50 can give someone in a developing country cataract surgery and a new life where they can work for themselves, rather than simply beg for spare change.

We need to change our view of the world and understand that “THEIR” problems are “OUR” problems, not just from a humanitarian point of view but from an economic and security point of view.

I firmly believe that the affluence the U.S. has enjoyed the last few decades cannot continue to exist securely and safely for the long term as long as the majority of the people on the planet (many just miles from our own borders) are forced to try and live on less than $2 per day and make heartbreaking decisions like which child will go to school and which will have to work to help the family survive.

I saw in person that organizations like World Vision are truly making a difference. Myriam knew many of the parents and children in the community personally and after registering the families, each family received a gift “bowl” of goodies, like flour, cooking supplies, and little things that we take for granted but mean so much to a family living on the fringes of society and the edge of survival. 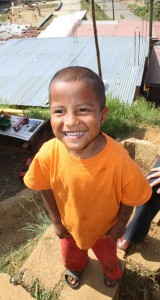 One lady had received help with fixing her house and a new bed after the rains had destroyed her old one. She proudly toured our cameras around while singing the praises of World Vision.

Medellin’s local government is to be applauded as well. They have a new and modern health clinic that offers medical treatment at greatly reduced cost to families in the Comuna 8 (in the meantime my health insurance premiums in arguably the most affluent society in the world climb 15% annually for less and less coverage). 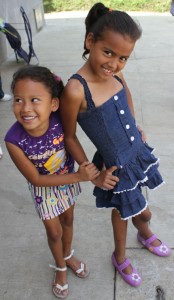 They are building an Eco Park that will draw tourists from all over the city and possibly the country and help bring local tourism revenue as well.  This strategy has proven effective in other at risk barrios in Medellin like Santo Domingo, where a new library and metro cable station was built and now is one of the more visited sites in the city.

A good economy is probably the surest way to break the power the gangs have over the Comuna 8 and the combination of World Vision, brave volunteers from the community and an enlightened government in Medellin could be just the powerful combination necessary to break the decades old cycle of poverty and gang control.

If you’d like to find out more how organizations like World Vision help so many children and families on our planet whose lives are sometimes (and sometimes all the time) at risk or at best can be described as a living hell, then please visit their website at www.visionmundial.org or www.worldvision.org .  Also check out www.thelifeyoucansave.org for other practical ways for helping others.

You can view more photos from our tour of Comuna 8 HERE.