We crossed the border by boat from Punta Gordo, Belize into Livingston, Guatemala and could immediately feel the difference, not in the weather (still unbearably hot), or the mosquitoes (still out for fresh blood) but in the culture and the way things immediately went smoother for us. Buses& boats ran on time, no more hassles about a camera and we felt completely safe and at ease.

Livingston is not a typical Guatemalan town by a long shot as it is largely shaped by the mixture of Garifunas, indigenous Mayan natives and tourists. But don’t get it wrong. Livingston is not throngs and throngs of tourists, more like a smattering of backpackers and adventurers who are used to hitting obscure destinations. The town is peaceful and tranquil with a good energy.

After over-nighting in Livingston we headed up the incredibly beautiful Rio Dulce River to Casa Guatemala, an orphanage that began to help the many orphaned kids from the decades long, brutal Guatemalan Civil War. The orphanage, originally founded by a Canadian Couple who had established similar outposts in other war torn areas in Southeast Asia, is well known in the area and overlooks the beautiful Rio Dulce River. If you didn’t know better it could easily be mistaken as an eco-touristic resort from the distance on the water. But it’s no resort. The work they do is heart-breakingly serious.

Over the years, the orphanage has evolved into a home and school for orphaned, disadvantaged and abused children as adoption laws have changed. They’ve expanded beyond their founding mission to also help care for and educate kids from the neighboring communities. Many of these families have fished or farmed in the area for centuries.

Some of these kids commute can include a combination bus, hiking and /or canoe over miles of terrain and water. The kids that have to travel 3 hours or so usually stay on site for free and only go home every 6 weeks or so. The kids that live in the adjacent villages come back and forth every day.

The orphanage, school and medical clinic, like many non-profits, depend largely on donations and grants (no government money) but they are also doing their best to ride out the inevitable rough spots by being as self-sustainable as possible. I don’t know what impressed me more, the very organized but loving way they ran the place or the way they used their resources to attempt 100% self-sustainability.

The kids catch and clean the fish they catch for dinner in the river. They have a farm where they raise animals and crops to eat or sell in their nearby Hotel Backpacker’s  hostel and accompanying store. The kids all have chores and they range in ages from very young up to 17 or so. It’s an equal mix of boys and girls which is notable because in much of Central America (as in many parts of the world) school is so expensive for the family that all too often only the boys will get fully educated.

All in all they care for anywhere from 250-300 kids at a time and volunteering travelers are key to the orphanage’s long running success. We met travelers from all over the world including Spain, The UK and San Diego California (shout out to Nate, whom we’d later serendipitously run into in Roatan).

They guys were cool enough to let us eat lunch with the kids (it was a long weekend so only the full time resident kids were around). Even though we were there only a few hours, I felt a connection to this place and especially the kids who were not shy at all with giving out hugs and making conversation. I don’t have a lot of kids in my life on a daily basis so I was really touched and overjoyed to be there and enjoyed every hug, every conversation, every chance to interact with these precious, happy souls.

Long term volunteers typically pay around $300 U.S. for a minimum 3 month volunteer program which covers their food and very sparse lodgings. Shorter term volun-tour stays are also available which is where their Hotel Backpackers hostel comes in handy. I can tell you that unlike too many so called “Voluntour” organizations, there seems to be very little administrative and other fat at Casa Guatemlala with the $ going directly to help the kids. 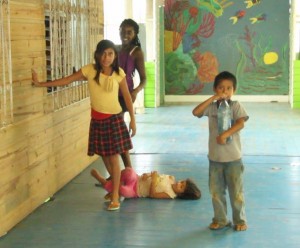 It was an incredible experience and we didn’t want to leave but we had a date in Guatemala City so Heather, our contact, and her crew took us in their boat to the neighboring town of Rio Dulce where we caught a bus to Guatemala City.

Our hotel was in the middle of downtown, a lovely hotel called “Posado Belen Museo Inn” which I think may be the most unique and lovely little hotels I’ve ever stayed in. The owner, Francesca, was so sweet and even drove us to a local restaurant to have a late dinner. Posado Belen Museo Inn is somewhat famous for their hospitality, getting rave reviews on Trip Advisor and other sites and I understand why.

After 3 days at the Posado (Bed & Breakfast) and traveling around central Guate (as the locals call Guatemala City) I was no longer afraid to step out the door. Guate admittedly has a bad reputation.  perhaps because the buildings are so old they are historical status and the owners are not allowed to tear them down but instead required to restore, which means lots of $ typically. Since many building owners don’t have the kind of $ needed to restore, many buildings remain in disrepair and look abandoned giving parts of  downtown Guate a bit of a ghost town feel.

However, just beyond the abandonment are actual businesses, and some of them, like the Posado Belen Museo Inn and the gym down the street I was able to visit a couple of times, are very nice.

We spent a lot of time in nearby Ave. Sexta (6th Avenue) which is a completely redone pedestrian street downtown with great restaurants and nightlife. On the weekends it’s packed with families and tourists enjoying downtown Guatemala City. I won’t say yet that Ave. Sexta rivals the upscale nightlife zone of Zona Vive, the upscale suburb on the outskirts of the city, but it’s a great addition.

I’ve stayed in Zona Viva and it is indeed nice and gives travelers a sense of security they perhaps don’t have downtown but after this experience in downtown Guate, I’ll return there again and again. It’s more authentic and just more my style.

The highlight of the trip for me was drinking goats milk directly from the live goats parked in the middle of downtown Guate. Warm and good.. what an ingenious, entrepreneurial idea.

Another highlight while in Guate was when we covered a punk show with some old friends of mine from an initial trip I’d made in 2009. They were cool enough to put on a show in honor of Raw Travel and my return. It was a full day of music with 10 or so bands playing.  It was good seeing old friends while making new ones. The show was pretty much over just before dark as many of the kids and bands had to return home to their neighborhoods on the outskirts of town.

Earlier in the day we hit the downtown market and it was clear we weren’t in Belize or Mexico City anymore. People were eager to show us Guatemala City culture and they almost even hammed it up for us with incredible hospitality.

It hit home what a friendly place Guatemala can be when a grandma in the market would not take my money insisting instead on giving me fruit from her stall for our journey. Free fruit at the market?

Perhaps this was the point I began to realize I was falling in love with Guatemala. This would be a feeling I’d encounter over and over in my travels throughout Guatemala.

There was a somber side as well. On the Sunday of our arrival at the town square we noticed a group of Guatemalans, mostly women, who were demonstrating to commemorate the ghastly array of war crimes committed against women during the Guatemalan Civil War (one of the main perpetrators and so called political leaders of that era had been convicted of war crimes recently but was so old would likely never serve time).

We also came across posters of some of the “Disappeared” plastered on the walls. It was a reminder of how much misery and pain engulfed this place not so long ago.

Perhaps that is why people were so friendly. I’ve noticed in my travels that places that have recently emerged from tragedy and loss (i.e. Colombia, Serbia) that people seem to really enjoy living life and are gracious, friendly and outgoing towards visitors. It’s just a theory but I remember thinking as Francesca from the hotel hugged me goodbye as we were heading to the beautiful city of Antiqua nearby, how many hugs I was getting in this country and how good it felt to be in Guatemala.

It’s a fact, Antigua is crawling with tourists and travelers but for good reason. This is one of the most beautiful and historic cities in all of the Americas. They readily welcome travelers with accommodations and restaurants that fit almost any budget and desire. You can’t walk a block in downtown Antiqua without your mouth falling open in awe at the beautiful historic architecture and parks. It doesn’t hurt that the town is surrounded on all sides by 3 awe inspiring volcanoes (one active). Yes, it’s full of tourists, but for good reason and after a while on the road, you crave some “pampering”.

Speaking of awe inspiring, a trip to Panajachel and the incredible Lago Atitlan should be on any Guatemala traveler’s agenda. In the 1970s hippies from all over the world discovered the village of  Panajachel and the lake and many of them never left.

Another sign that I was not in Mexico or Belize anymore was the quick response we received from the Guatemalan Tourism Bureau when we reached out to them. Within a day we were offered an English speaking guide, transportation and set up with one of the fine travel companies in the region Viva Atitlan. As the name suggests, Viva Atitlan specializes in helping visitors get in touch with the several unique and different cultures in the surrounding villages at the lake and they know their stuff. Marlon from Viva Atitlan picked us up at our hotel and made all the arrangements for us when we arrived.

Perhaps the best thing Viva Atitlan did was connect us with Delores. Delores is a native of one of the villages surrounding Lago Atitlan. She ended up marrying one of those hippies from the 1970s (who ended up becoming a successful author). She subsequently lived in Santa Fe, New Mexico for over a dozen years. Delores perfectly straddles three cultures, Indigenous, Latin and U.S.

Now living back home, Delores was very well known among all the villages as she guided us from well-known local painters to village Shamans conducting ancient spiritual ceremonies to a cooperative of women artisans who dye and sell their textiles directly to tourists. Delores even tried to teach me how to carry a bundle on my head like the indigenous ladies of Guatemala do so effortlessly.  Not as easy as it looks I assure you.

Delores was a gentle, calm spirit and I really enjoyed filming with her and learning about her culture and can’t wait for these segments to air so others can be turned on to her expertise and energy. Many thanks Casa Guatemala, Guatemalan tourism board, Posado Belen Museo Inn, Guatemala city Punks, Viva Atitlan, Delores and most importantly, all the friendly helpful people of Guatemala. I hope we can do you all proud.