Mexico City began with a rumble, or more specifically, a 5.8 magnitude earthquake late Saturday night, early Sunday morning. I felt our hotel room dip and sway before the crew had ample time to say “what the????”. Things in the room clanged and clattered as the entire building moved back and forth for what seemed like forever, but was probably 15-20 seconds.

Sheer fear (we were on the top floor) and awesome power is the only way I can describe it. No injuries, no damage, just a serious blast of adrenaline making it hard to sleep. Despite having spent so much time in California, this was my first earthquake.

Had it not been for the earthquake, I would have definitely slept the sleep of the dead. Sleep has been a stranger to me this past week as I was super busy coordinating the shoot and preparing an 8 week journey through Mexico and Central America that has been months in the making. It will show on camera with some serious eye baggage and I feel like I’ve been run over by said earthquake. But keeping it raw and real.

The center is crowded but a great place to make home base as we were able to walk around the 1st couple  of days to get to the major sites. I took part in an ancient Aztec cleansing ritual to start the trip off right. The Shaman was super cool and blessed the remainder of our trip. He must have done something wrong because 3 days in and I already have a case of Moctezuma’s Revenge. May as well get it over with I suppose, but if this keeps up we’ll be targeting some toilet paper sponsors.

OK on to more pleasant matters. On the weekends, the Zocalo reverberates with the sound of drums as Aztec dancers show off moves that have been passed down over the centuries. They dance for hours on end for tips (propinas) from the crowd.

Next we made our way to El Chopo market which has to be one of the most unusual flea markets I’ve ever seen in all my travels and one you won’t likely find in any standard tourist guide. This market has been going on for 30+ years but instead of fruits, vegetables, etc. this one is full of all kind of underground music and paraphernalia like band T-shirts, Doc Martin shoes, anything and everything having to do with underground culture. Though it’s underground it’s also very official and very huge and crowded. There are probably more tattoos and piercings per square foot in El Chopo on any given Saturday than at a Metallica concert.

You really can’t visit Mexico City and not notice the influence of underground culture. It’s in your face. It seems every third or fourth young person is sporting some kind of tattoo, piercing or expression of a rock & roll lifestyle. I’m left wondering if they are somehow paying homage to their Aztec roots or is the California Chicano culture influencing Mexicans or visa versa.

To my knowledge, El Chopo has rarely if ever been covered by U.S. television (it has on BBC). Luckily we  had trusted local pals to guide us there and tell us when it was safe to pull out our cameras. At first I was on edge and tense but the feeling quickly wore off as we got to know many of the vendors and attendees. Mexico City is a city of contrast and perhaps nothing illustrates this contrast more than El Chopo.

That night we headed over to Garibaldi, which is basically an area where scores of Mariachi bands and musicians gather to be hired out by locals. Mariachi music is everywhere but if you tire of the audio sensation, you can hop over to the food section and grab some tacos or other authentic Mexican food. We did, and I’ll just say LA is good but Mexico City is the real deal.

And yes, I did resist the temptation to purchase an over sized mariachi hat. For now.

We began the day at Torre de Latin America (Tower of Latin America) one of the tallest landmarks in Mexico City and the first “successful” towers to be built in this seismic region to withstand the numerous earthquakes.

Renzo made his way to the top to grab some aerial shots of the sprawling city while Moses and I strolled around to gather some b-roll at the Palacio De Bellas Artes (Palace of Beautiful Arts) and adjoining Paseo por el Centro Historico (Passage of the Historic Center) and park. The park is incredible and full of beautiful, classically designed water fountains that soon filled up with young, screaming kids cooling off on a hot summer day, (until a police officer firmly but kindly shooed them to another fountain made just for kids to cool off on a hot summer day).

We then made our way over the Lagunilla market which is also off the beaten path and was just as big or bigger than El Chopo but was a bit more of a traditional flea market. Lagunilla offers up things to eat, drink and wear and appeals to a more mainstream clientele but that doesn’t mean the items on offer are boring. Not in the least. Among the items I spotted were antique stuffed Jaguar tigers, rare mineral rocks, one of a kind design T-shirts, ancient artifacts and more… much more like Chapulines.

Though I normally shy away from fried food, and specifically eating insects in any form, my crew and some convincing locals were enough for me to try some Chapulines, which is basically fried grasshopper. It’s marinated with lime and hot sauce but… add all the condiments you like, I’m still not digging it.

To rid ourselves of the aftertaste of fried grasshopper we headed to a local food market to partake of a massive but cheap and more traditional meal at one of the other local fruit and meat markets (always a good spot to grab an inexpensive authentic meal in Latin America). 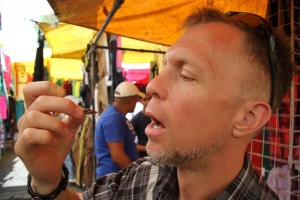 Then it was off  to one of the highlights of our trip so far, as we headed to the southern part of the city to XoChimilco (pronounced Chochimilco). XoChimilco was once where the Ancient Aztecs navigated and lived on the canals. Today the canals are where travelers, families and friends gather on colorful, rented boats to eat, drink and be merry and listen to live Mariachi or traditional Norteno music.

While being rowed down the canals, smaller canoes and boats pull up beside to sell food, drinks, souvenirs and… you name it. Our boat was named Violeta and we were fortunate to be on the river just as the sun was setting which made for some pretty outstanding footage. 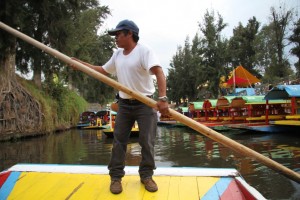 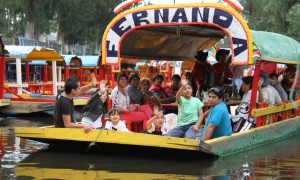 On the way back to the hotel we headed over to Frida Kahlo’s old neighborhood of Coyoacon, an absolute treasure of a neighborhood where you can stroll among upscale Mexican families enjoying the park and unique Mexican sweets like churros.

SO FAR SO GOOD

I was surprised at how calm, safe and serene this large and supposedly chaotic capital city actually seems. Police (unarmed by the way) and security are highly visible in all areas and after 3 days of roaming all over town we’ve not had one instance of even a hint of danger.

Anytime you are rolling around a strange place with video equipment it is easy to be paranoid, but I have to say, (I don’t think these words will come back to haunt me either) Mexico City feels as safe or safer than Buenos Aires, Rio, Bogota or Lima.. and given my last few days there with the mass shootings and gun play, safer than Santa Monica, California.

Traffic in Mexico City is no paradise but it’s not that horrible either. In my opinion, Los Angeles and other North American cities are much worse. They have a rent-a-bike program called “Ecobici” which seems very popular with the locals. The Metro (Train) system is easy, safe, cheap (around 30 cents U.S. per ride) and convenient. We’ll be weaning ourselves completely off of taxis very soon to both save money and to travel in a more eco-friendly manner. 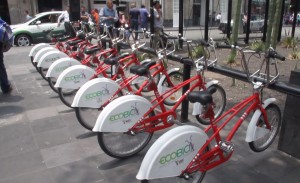 Tomorrow, it’s up early for another day of shooting. We have a lot ahead of us including shooting the famous “Lucha Libre” wrestling where rumor is my producer is trying to arrange a match with lucha officianado, “El Kiss”. Today I bought my mask and have been practicing some moves.

We’re also arranging some Aztec language lessons and hopefully, if things come together, we’ll be teaching some recycling tips at a local school and a visit to the iconic religious site of the Basilica of the Virgin of Guadalupe.

RAW TRAVEL IS BACK IN PRODUCTION AND GEARING UP FOR OUR OCTOBER 2013 DEBUT IN THE U.S. AND INTERNATIONALLY.

WE ARE TRAVELING TO 7 COUNTRIES INCLUDING MEXICO, GUATEMALA, BELIZE, HONDURAS, NICARAGUA, COSTA RICA AND PANAMA CITY. THIS IS THE FIRST ENTRY FOR MEXICO CITY WHERE WE’LL BE STAYING ALL WEEK. MORE INFORMATION AT WWW.RAWTRAVEL.TV AND WWW.FACEBOOK.COM/RAWTRAVELTV