Lima, Peru – After living abroad in Latin America off and on for almost a year, I’ve come to expect the unexpected, both good and bad. I was not prepared, however, to fall in love with Lima, especially in the middle of their cold, damp and grey winter when the sun rarely if ever makes an appearance.

In fact, my eyes are super sensitive to sunlight so when out doors I almost always wear my sunglasses but in two weeks while in Lima, I never once wore them .

Lima, Peru is a huge city and if you are visiting Peru, chances are you are at least stopping through this city of 8 million souls. Most travelers will spend 1 or maybe 2 nights here.

If you’ve done the Machu Picchu thing, you already know that while it’s stunning it’s also a little like visiting Disneyworld, albeit more beautiful, natural and spiritual. When I was there in 2007, I couldn’t escape the feeling I was trampling on something sacred.

Luckily for Peru, there is so much more to this incredible country than Cusco and Machu Picchu and that includes the capital city of Lima.

This was my first time to spend a significant amount of time in Lima, so I wanted to live as much like a local as possible. After staying a few days in a hotel, I secured a small apartment  in the somewhat upscale and modern neighborhood of Miraflores.

Miraflores is where many tourists end up and I heard English being spoken almost as much as Spanish. Normally in such circumstances, I’d flee another direction, but after so many months of basic, survival conversations in Spanish (ordering food, securing a room, etc.) I was ready for just a touch of English and yes, even some Gringo culture.

Miraflores and nearby neighborhoods like San Isidro  are so modern, clean and full of high rises, it’s easy to forget you’re in a third world country.

In Miraflores life seems to revolve around Parque Kennedy, a beautiful park dedicated to the slain U.S. President. The park is surrounded by restaurants, hotels and hostels with tourists seamlessly mixing in with the locals.

Just off Parque Kennedy is Calle Pizza (Pizza Street) which is named after the inordinate amount of pizza restaurants. It could be renamed to Calle Tout, as a lone traveler this was really the only place I felt pressured and slightly harassed to buy stuff (legal or otherwise). Overall, I’ve seen much worse in my travels abroad and most travelers can freely roam around Miraflores without too much unwanted attention.

If you want souvenirs in a hassle free environment, at night vendors come from all over to the center of the park to ply their wares. Or try the massive Inca Market, just a few blocks away.

I think the thing I welcomed most about being in Lima was the wide variety of restaurants. I probably appreciated it more after spending so much time in Medellin, Colombia, where the local cuisine is awesome but can be a little redundant after a few weeks.

Of course I sampled the ceviche and sushi, which I had been craving for months, but I also tried some pretty good Middle Eastern food, vegetarian cuisine and of course street food, which in my case was a pavo (turkey) sandwich that was cheap and out of this world good (and cheap).

I also tried a longstanding, favorite restaurant for locals and travelers alike called Manolo’s, which is pretty legendary for their over sized deli sandwiches and churros, a common South American pastry that you can get filled with chocolate, dulce (caramel) and other flavors.

In addition to the wide variety of food and accommodations, Lima has a decent amount of sites and cultural activities that could keep a traveler busy for a solid week or more.

In El Central, the downtown area of Lima, there is the beautiful and picturesque area of San Martin that is also a good spot to sample a bit more authentic Lima nightlife. I was able to check out the area with some local residents who took me down a couple of side streets to see the El Averno Cultural Center, an important and very colorful cultural center well known in the Lima underground scene.

Like most downtown areas in major cities, you want to be a little careful with your belongings and follow precautions like taking taxis and trying not to wander the streets alone at night.

Also near San Martin is the famous Magic Circuit of the Water in the Parque de la Reserva, which is reportedly one of the biggest outdoor water/light shows in the world. I’m disappointed to say that as close as I was, due to time constraints, I was unable to get by there and take this in, but I hear it is the thing to do.

And if you are in the mood for ruins and don’t feel like paying the exorbitant fees to assist in the trampling of Cusco and Machu Picchu, then check out the  Huaca Pucclana ruins located right in the middle of the city on the outskirts of Miraflores.

The Huaca Pucclana ruins were settled sometime around 500 AD by the Lima Indians as a temple to worship the sea. The ruins are still being excavated and archeologists are still discovering fascinating details of what life was like for the Lima Indians every year. 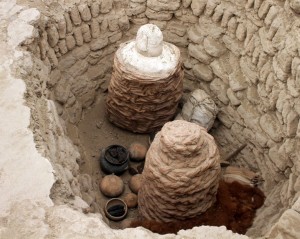 I’ve seen a lot of ruins over the years (including the aforementioned Machu Picchu) and let me tell you I found Huaca Pucclana to be fascinating. Tours are provided in Spanish and English and last for about 45 minutes. Admission is only 10 soles (about $3.50 U.S.) and in my opinion that was money well spent.

In addition to ruins, they also raise animals that would have been typical during the time of the Lima Indians. These include llamas, alpacas, cuy (guinea pigs) as well as a hairless Peruvian dog that the Lima Indians bred and while nothing beautiful to look at, petting him was highly addictive.

His body temperature was so warm (evidently to compensate for lack of hair) and his hide felt a little like maybe a really warm elephant might feel. He enjoys being petted so much that he barks loudly when people stop, so the guy is a little spoiled and perhaps explains what I understood his name to be “Shout”.

According to our tour guide, this breed of dog was almost extinct just a few years ago, so the Peruvian government has taken steps to save the dogs, including making them the official dog of Peru. On the day I was at the ruins, there were folkloric dancers as well. 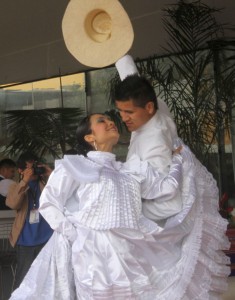 Now if you’re an adrenaline enthusiast, then just head to the Malecon overlooking the beach area of Miraflores. There are professional Parasailers that jump off the cliffs and travelers can either watch (like me) or for around a $50 U.S. fee, take a dive with the pros. Finding the parasailers is easy, just head to the hard to miss Parque del Amor (Park of Love) statues and look up or out to sea. Chances are you’ll see one flying by.

As I said, in Lima in winter, the sun does not shine much. In fact, it can be a bit gloomy and depressing with the heavy clouds and fog on a daily basis. But maybe because I found Lima to be such an international city with restaurants, nightlife and friendly but not overbearing locals I was really glad to be there. 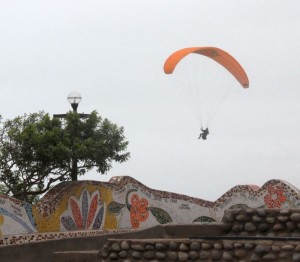 After so much time in Latin America, I found Lima to be a good transitional city for me to  ease the culture shock of returning back in the U.S. Overall, it’s a good city for any city slicker traveler who’d like to experience authentic culture without missing some creature comforts.

So next time you’re in Peru, be sure and allocate a couple extra days to take in the sights, sounds and tastes of Lima and if you happen to visit outside of winter bring your sunglasses. I hear you’ll need them!