Our “wrong-side-of-the-road” driving adventure continued as we made our way to Grande Riviere, a remote beach haven on the north coast of Trinidad. Grand Riviere is accessible by car through miles of very narrow and windy roads via the northeast of the island. However, the drive along the east and north coast is one of the most beautiful I’ve ever experienced with remote beaches and charming little villages all along the way.

We stopped several times and as a result arrived in Grande Riviere after it was already dark, admittedly  not an ideal situation for navigating the unmarked road, narrow switchbacks and unpredictable terrain.

As a tourist destination, there is not that much to the town of Grande Riviere. It’s a small fishing village like so many others but with one distinct advantage, it’s a prime spot for watching the endangered Leatherback Sea Turtles lay their eggs.  With a couple of hotels strategically located right on the beach, during the turtle watching season (March-September) you can literally walk a few feet to the beach and see them doing their ancient business first hand.

During the season, the beach area is protected at night, which is when the turtles come ashore to nests, so you can only access the beach with official permits (easily purchased at the small Visitor Center close by) and under the guidance of a trained guide. The tour itself is relatively inexpensive and very informative.

Trinidad is one of the most important Leatherback Sea Turtle nesting sights in the world and at peak season, Grande Riviere can have up to 300 nesting leatherbacks in a single night. On the night we were there, there were probably around 50. Adults can weigh up to 2,000 lbs. and only the females come to land. They always return to the same beach where they themselves were born. While on the beach the female digs an egg chamber a few feet deep with her flippers and can lay up to 100 eggs.

After slipping into a slight trance while laying her eggs , she covers the chamber with sand and smooths it over to disguise the area from predators and returns to the sea. She may return up to 8 times a season to lay eggs.

The leatherbacks’ numbers have declined over the years for a variety of reasons including loss of habitat and people taking advantage of the slow moving creatures by using either their eggs or the turtles themselves as food. 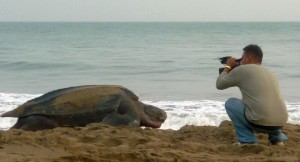 Indeed the night we were there we saw a turtle that had obviously been injured, probably the result of a boat propeller cutting an ugly gash in it’s shell. At least this one survived.

Our guide regaled with tales of other turtles missing fins, as people would cut off parts of a live  turtle to use as food. He also said there had been instances of people actually piggy back riding the turtles when they come ashore, interrupting their nesting patterns.

Most likely only one or two out of a thousand eggs will survive their natural predators. The beach was full of eggs that had been dug up by local dogs and sucked dry.

Now, Ill be the first to admit that watching a turtle sounded as exciting to me as watching paint dry, but surprisingly, it was the coolest experience of the entire trip.

Watching these endangered, pre-historic animals haul their immense girth from God knows where in the deep, to lay dozens of eggs deep in the sandy beach is nothing short of amazing.  The turtles are on a mission that is ingrained in their tiny brains, to lay as many eggs, as deeply in the sand as possible and to keep perpetuating the species. They use their fins, which serve them so well in the ocean, to struggle onto shore and clumsily maneuver themselves on land. Then they use their tail and fins to burrow their back end as far as possible before they fall into a trance and lay the eggs.

At night, flash photography and flashlights are prohibited as the turtles are very sensitive to light and this would interrupt the nesting. So we were restricted to the guide’s infrared red light for visibility. We were not allowed to touch or disturb the turtles in any way, until they fell into their egg laying trance, at which point we were told it was OK to touch them. It felt like you’d expect a shelled reptile to feel, hard and prehistoric, not warm and fuzzy at all. 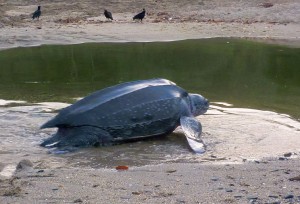 We had heard that if we were industrious enough to rise just before sunrise we might be lucky and  spot some of the laggards who had arrived late in the night (early in the morning) and would be finishing up their business before heading out to sea.

As much as I’m not an early riser, we are used to sleep deprivation on these shoots so we set our alarm for 5AM and hit jackpot. When the dawn arrived there were still half a dozen or so leatherbacks on the beach finishing up their tasks.

One mama turtle got disoriented and ended up in the bay rather than the ocean. We were able to eventually help guide her out to sea. 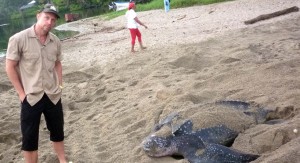 All in all the leatherback turtle watching is a pretty awesome thing to experience. I hope as sustainable tourism continues to take hold in Trinidad that their numbers will continue to rebound. If you want to learn more about saving the leatherback turtles and how you can help, check out the fine folks at the Turtle Village Trust.

We left Grande Riviere and headed back to Port of Spain but not before stopping off in Arima to visit the AmerIndian Museuem, which is in a reproduction of a long house used by indigenous communities centuries ago. The AmerIndian community in Arima is the last vestige of a shrinking organized community of people with indigenous roots on the island.  We were led on a tour of the museum by Ricardo, the current Chief, who maintains the museum and also conveniently lives next door.

With all of the different ethnic influences in Trinidad (East Indian, African, Asian, Middle Eastern, Venezuelan, etc.), it’s easy to forget that the island was once inhabited entirely by indigenous tribes. But as Ricardo said, evidence of their influence is everywhere from the names of roads and towns, to the way food is cooked.  Arima is only a few kilometers from Port of Spain and easily and economically accessible by “Maxi Taxi”, a small shuttle bus. Entrance to the museum is free, though a small donation is asked for and appropriate.