The beach town of Mancora, Peru is as rowdy and boisterous as nearby Vichayito was quiet and tranquil.  Mancora doesn’t have a particularly pretty beach either, but then again, people don’t flock from all over the world for the picturesque beaches (though there are plenty very nearby) .  They come for the surfing and nightlife.

Here, in Mancora surrounded by desert on one side and a beach on the other, it’s easy to feel both cold and hot at the same time, at least this time of year (Peru’s winter). The sun beams down and trust me, will burn you, yet there is always a brisk, cool breeze blowing.  Indeed, after attempting to surf my 1st day here, I never got 100% warm again.

I stayed at the beautiful if rustic Kon Tiki bungalows, which sits high on the hill with an incredible view of the town and beach below. To get to town and the main beach area from Kona Tiki you must walk down a twisting and turning (and if you happen to be very intoxicated or really clumsy, potentially perilous) path of steps and dirt until you get to the bottom. About a 2 minute hike down.

Once at the bottom you navigate through a narrow alley, which in the almost pitch black darkness of night, could feel intimidating for 1st time visitors, but is completely safe, as families live all along the alley.

The biggest danger was the unpredictable, small and old dog who couldn’t figure out if he liked me or hated me. Half the time he growled, barked and acted like he wanted to rip my face off and the rest of the time he seemed to forget the previous incident and completely ignored me as if I never existed.  To steady my nerves each time it was time to pass the old guy, I made a game out of it trying to predict what his response would be. Though I had a 50/50 shot of getting it right, I rarely was.  By the end of the trip I had figured out he was harmless.

Of course climbing back up the Kon Tiki is not as much fun as going down and even a seasoned runner like me was a little winded when arriving at the top, but it was good exercise. Sort of like living at the top of a 5 story walk up in New York City, without all those silly handrails to hold on to.

Besides the surf and partying, the locals here are perhaps another draw. While not aggressively friendly, they are not overly pushy either. A simple “no gracias” is all it takes for someone to stop offering to sell you something.

I also couldn’t sense any of that awkward tourist vs. local vibe you get in some heavily traveled areas.  The locals are laid back and very non aggressive and the tourist, which consist largely of young backpackers, hippies, surfers and the occasional older tourists from around the world, seemed for the most part respectful in return.

Speaking of hippies, I discovered a lovely Vegetarian restaurant called Angela’s and it became my top stop for almost all my meals while in Mancora. They had a good vibe and killer Wi-Fi but the main draw was the food which is healthy and like most things in this town, very reasonably priced.  Their vegan sandwiches were as big as a plate and cost about $3.50. Maybe I’m making up for lost time after so many months of struggling to eat healthy in Latin America but I do believe I’d never eat meat again if I could simply take the chef/cook from Angela’s back to the U.S. with me.

On the weekend I was there, I was approached by a trio of Argentine teen girls from Cordoba who were selling “happy cookies” to make some travel money. If you don’t know what makes cookies happy I won’t spoil the surprise. The girls seemed to be traveling with a larger group of gypsy like Argentines who were performing music, comedy, fire dancing and more for tips. A traveling motley crew of Argentine circus performers if you will. The entertainment was actually pretty good and well worth the $2 soles (about 66 cents) I provided as a tip.

Mancora was pretty much in a party mood every night of the week that I was there (Thursday-Monday) and if you’re not, well tough luck. Try though I tried I could not get away from the discos throbbing beats and incredibly annoying music (all music is annoying when you’re trying for some shuteye no?) no matter where I went. The noise traveled so well up the hill to Kon Tiki that some nights I literally felt I was in the disco. Ear plugs, especially purchased for the occasion, did little to stop the assault of cheesy electronica and reggaeton beats vibrating the walls.

Now it may be that most of the townspeople don’t mind this assault on the senses in the middle of the night EVERY night. Maybe they’ve built up a tolerance to the noise by now or maybe they see it as a tradeoff for the tourism dollars that float Mancora’s way. But I couldn’t help but feeling the whole town of a few thousand was held hostage to a few people (maybe a hundred?) who wanted to party the night away listening to God awful music turned up to well beyond necessary volume.  Mancora’s mostly bamboo structures do a poor job of keeping noise out (or in, if you’re the disco in question) and you’d think there would be some kind of town ordinance to control the sound at least a little. 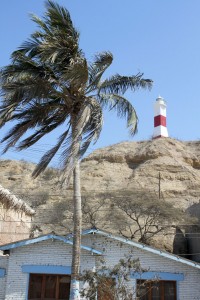 What Mancora has going for it, besides its surf and party vibe is its size. It’s big enough to offer almost anything a traveler can want… a bus station with frequent service, cheap moto taxis to get to surrounding sites (isolated beaches, thermal mud baths, etc), good restaurants, regrettably the aforementioned disco row and even a small gym where I had a decent workout.  Yet it’s small enough that if you stick around for more than a couple of days, you’re going to make friends with some locals for sure and you can get from one side of town to the next by foot.

As a result, Mancora feels really safe and what parts aren’t safe for tourist (isolated beaches on the fringes of town), the police warn you away from. They even have one poor soul who patrols that part of the beach to warn unsuspecting, wandering travelers like me away and back to my assigned beach area.

Yes, Mancora has a lot to offer but quiet and tranquility on the weekends (or possibly any time) isn’t one of them.  But if your easily bored by endless stretches of isolated beaches and crave things like fast Wi-Fi, excellent food choices and a pretty iron clad guarantee of a party going on no matter the time of year, then Mancora is your spot. Just remember to bring your earplugs! 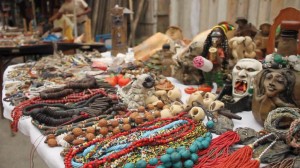