To see the Raw Travel trailer visit HERE and for more information visit the website at  Raw Travel. 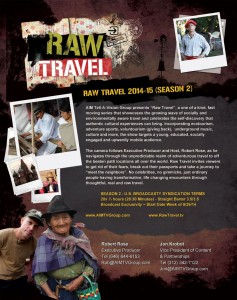 Jon Krobot is an experienced media executive based out of New York City. He has over twenty years of experience in the media industry having worked in a variety of job functions including distribution, advertising sales and marketing.

Prior to joining AIM TV and the staff of “Raw Travel”, Jon was a Vice President, Syndication Central Region for Tribune Entertainment where he was responsible for distributing shows such as Soul Train, Dreamworks SKG Movies, Family Feud and more. Prior to that, Jon held similar positions in syndication with Tribune Company in Los Angeles.

Jon is also an avid traveler, spending time in various parts of Australia, New Zealand, China, Costa Rica, Mexico, Italy to name a few. Besides International travel, Jon has unique domestic knowledge as he has traveled to virtually every major U.S. city through his time working in the television industry.

Prior to working in the domestic television syndication, Jon worked in research and advertising sales. He was a national TV representative in New York, Chicago, Philadelphia, San Francisco and Detroit as well as a local Account Executive in Nashville.

In his current position for Raw Travel, Jon helps oversee the distribution, advertising sales and content creation and partnerships for the company. Working for Raw Travel combines his great passions of television, marketing and travel.