The announcement is just the latest in a string of licensing deals from Raw Travel’s international distributor Off the Fence Distribution, who has also inked several other deals for the series in territories in Europe, Africa, the Middle East and on a variety of airlines the past several months.

Off the Fence is responsible for licensing Raw Travel (58 x 30’) to media outlets outside of the United States and represents the show at global television markets, including the upcoming market MIPCOM later this month.

Raw Travel is a 30 minute adventure travel & lifestyle series that incorporates two of the fastest growing segments of travel: eco-tourism & voluntourism. The fast paced show focuses on authentic experiences to often off-the-beaten-path destinations as well as other more mainstream destinations. The show recently debuted its 4th season in U.S. Syndication in the United States in 159 cities representing over 93% of U.S. television households.

“We are excited about working with Nat Geo People in Asia and in continuing to work with Off the Fence to expand our international audience even as our U.S. fan base continues to expand” stated Robert G. Rose, Executive Producer and Host. “Raw Travel’s unique perspective and positive message of socially consciousness living among an inclusive worldwide community resonates with global audiences. We are eager to welcome our new viewers and friends from across the globe and let them know we are proud to be citizens of the world with them.” 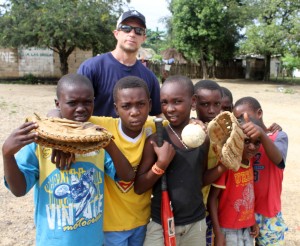 Off the Fence will be responsible for licensing Raw Travel (18 x 30’) to media outlets outside of the United States and will represent the show at global television markets, including at MIPTV in April.

Raw Travel is a weekly 30 minute adventure travel & lifestyle series that incorporates two of the fastest growing segments of travel: eco-tourism & voluntourism. The fast paced show focuses on authentic experiences to often off-the-beaten-path destinations as well as other more mainstream destinations. Season 1 focused on Latin America & the Caribbean with Season 2 plans for travel to Eastern Europe, Southeast Asia as well as parts of North America.

Raw Travel has been on an explosive growth track since launching in 70% of the U.S. via broadcast syndication last October. The show has been adding more cities to its coverage while growing and winning key demographics in major domestic US markets such as San Francisco, Chicago, Dallas, Portland and Orlando.

“U.S. passport possession has exploded as international travel has become more accessible than ever. Raw Travel’s ability to bring young demos back to broadcast TV surprised even me,” stated Robert G. Rose, Executive Producer. “Travel programming is extremely popular internationally. As we fill the void in the U.S., having a respected partner like Off the Fence gives Raw Travel an international footprint that’s key to building a global brand” Rose continues.

Georgina Eye, Head of Acquisitions, Off the Fence, added: “Travel and Adventure is a genre that continues to do well for us, and Raw Travel offers a really fresh and exciting take on it. The series gets under the skin of the countries and cities featured, and really taps into the current travelling zeitgeist of treading the less well-worn trail and seeking new experiences. It is a series that has really taken off in the US, and has attracted a younger demographic of viewers, and we know that it will have great appeal to buyers globally.”

About Off the Fence – http://www.offthefence.com

Off the Fence is the leading global non-fiction content company of global scale and reach, producing and distributing exceptional programming.

Our independent spirit and personal approach enables us the flexibility and dynamism to deliver the best for our partners. We bring a bespoke and commercially-savvy approach to our global business and have a deep understanding of local markets.

Off the Fence Productions makes award-winning programming and films that give a fresh perspective on human stories, and celebrate and explore the natural world around us. We have created over 300 of content for broadcasters including MTV, BBC, Channel 4, MSNBC, PBS, National Geographic Channel, Discovery and The Weather Channel. The creative team have been recognised by more than 80 awards, including Royal Television Society, Emmy, Golden Panda and Grand Teton.

We are proud to be celebrating our 20th anniversary in 2014, having grown from our roots in Amsterdam to being a global operation with presence in the UK (London, Bristol), USA (Los Angeles, New York), South Africa (Cape Town) and Germany (Mainz).