Of all the places in the world I’m hoping to visit before I get my passport stamped by that big customs & immigration office in the sky (or below?),  Vienna, Austria was never on that list. I don’t know why. It just never occurred to me.

I mean what few times I’d thought of Vienna I think I thought of high culture, classical music, maybe some sausages and well… to be 100% honest… Hitler and the horrors of World War II. It was a casual, cavalier but not a hostile ignorance.

I wasn’t knowingly spreading this ignorance to anyone, because I knew I didn’t know the real Vienna and only had a vague idea of what it might be like planted in my head by however many years of (mostly) U.S. media osmosis. I had not so much as considered a Wikipedia search on the subject and since I wasn’t heading there anytime soon, there was no need to do a quick study of the facts was there now? Wrong.

During our Eastern European shoot for Season 2, we were heading to Bratislava, Slovakia (another place I knew absolutely nothing about before visiting) and Vienna was a mere 50 minutes or so by train or boat away. As you can see, for me at least, ignorance is no excuse for not visiting a place. Otherwise I’d never go anywhere. Point of fact, I submit that it could be one of the best reasons to visit.

Lucky for us our new pal Marek from our earlier shoot at Cafe Finska in Krakow, Poland (our very first stop on this journey) heard we were heading to Vienna. He heartily recommended we  reach out to UK ex pat and travel author Duncan J.D. Smith otherwise known as the Urban Explorer. 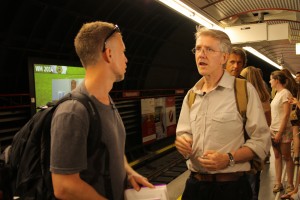 Duncan is  an extremely likable chap and a consummate gentleman. I could tell that when we first met him at the train stop in Vienna. He had graciously and unexpectedly spent his own money for train day passes for the entire crew. Cut my production cost and you have my gratitude. Do so while showing me a genuinely good time and you have a pal for life.

Duncan knows his stuff not only about Vienna but several ports of call in Eastern Europe including Budapest, where we were heading next. He hooked us up with one of his “Only in Budapest” guidebook as a parting gift. I would read it cover to cover on the train ride there. It would almost be like Duncan being there by our sides, whispering little know facts and anecdotes about places and sites we might not otherwise consider.

But back to Vienna, being with Duncan the actual author & guide in Vienna was immensely valuable to us. Duncan took us to those hidden spots right under the tourists’ noses that they almost always miss, even if they have another guide.

From the Tostmann Trachten Shop & Cellar, a traditional Viennese clothing store that offered much more than meets the eye in their basement (watch the show to find out) to Beethoven’s courtyard (I drank water from the same water fountain the great composer did many years ago) to showing us the grittier side of Vienna at the Graffiti walls down by the Danube, I was beginning to sincerely wish we’d allocated an entire episode and 5 days to Vienna. 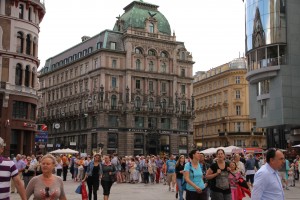 Duncan was one of those rare fact-filled but funny on camera guest that every travel host hopes for. I could relax and just have fun and hopefully have somewhat witty conversations and question and answers with Duncan on camera and the show just produced itself.. well, almost.

Not to say there weren’t moments when I was like “uh, huh.. this is exactly what I expected in Vienna”. Like when an arrogant prick (no pun intended, as you’ll see) of a Viennese took umbrage at our filming down in the historic, Mens’ Toilette downtown.

2) The toilette had a unique story.. but I forget what it is at the moment (watch the show)

3) It was completely empty when we began filming

4) Our cameras were respectfully not pointed in anyone’s direction…

but this chap comes down and with a booming and authoritative voice says “that’s quiet enough.. cut the camera… your finished.. this is not Kazakhstan this is Vienna”.. The last part I think is what really pissed me off (no pun intended) and I was ready to go toe to toe with this arrogant ass who had no authority whatsoever on either the toilet or our filming there.

But Duncan, being the gentleman that he is, somehow channeled his anger into something positive (a trick I’m still trying to master) and defused the situation.

We got our shot, the arrogant A^%hole finally left us alone and what’s more, we got the entire thing on camera. Scott, our camera guy told me later “I only cut when the guy who’s writing my check tells me to cut”. Great philosophy Scott and a good move. This toilet shot would have probably never made the cut, but now you can be guaranteed that it will.

But, for me at least, the most unexpected pleasure in Vienna came with a visit to the Prater Amusement Park . 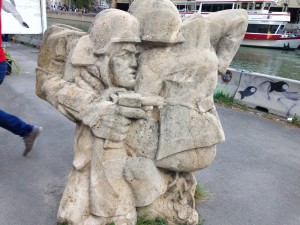 Not only was it a blast, but after our toilet incident, this was exactly what the doctor ordered to get me to humanize and like the Viennese people again and to understand, they have families, love their kids and are not just about high culture, history and lecturing to camera crews in toilets about civilized society. They need to shake it and have a good time too.

This amusement park is a feast for the senses. Don’t drink too much caffeine (or do any hallucinogens) before hand or it might just put you over the edge.

When you’ve had enough of “low culture” of serpent headed amusement rides or “freak” shows, I recommend you grab a pork knuckle at the famous Schweizerhaus at the fairgrounds along with a beverage of your choice. After all this I can honestly say, it was a fun, amazing trip to Vienna.

Like almost all first time destinations, I want to now go back, sans camera crew, and maybe explore on my own. But for this first time, I’m sure glad we had Duncan to guide us and show me a side of Vienna I’m 99.9% likely to have never seen had he not agreed to show us around.

Vienna is not an obvious “Raw Travel” destinations. It’s certainly not budget nor off the beaten path but you can see it Raw Travel style and we’ll show you how, when Bratislava / Vienna premieres this November. Stay tuned!