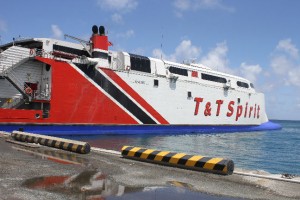 The goat races in Buccoo Bay, Tobago are not to be missed, so I took the ferry from Port of Spain, Trinidad to Tobago (2.5 hours) to catch the kick off of Goat Racing season. The ferry is a very inexpensive and easy way to get back and forth between the two islands.

Buccoo Bay is a tiny fishing village not far from the much larger Crown Point, which has scores of hotels, a couple of good beaches and the airport. If the ferry is full (as is often the case during certain times) then a flight from Port of Spain to Crown Point is usually very inexpensive as well.

Buccoo has a small, remote beach and is a good place to catch a glass bottom boat and do some snorkeling at the stunning Buccoo Reef. But what makes Buccoo really noteworthy is their big Sunday night street party called “Sunday School” which I assure you has nothing to do with church and the Buccoo Goat Races, which take place beginning the first Tuesday after Easter and each following Sunday throughout the summer.

Goat races have been going on in Tobago since the early 1900s and Buccoo is ground zero for the scene.  Here they recently built a big Goat Racing Complex and Stadium that at first glance, looks really out of place in this small village, but come Goat Racing day, it really comes alive.

Considering a big expensive stadium was build, you can probably guess that goat racing is pretty serious business in these parts. Goats and jockeys (the jockeys follow the goat with a rope at full sprint) undergo a rigorous training routine year round in the hot Tobagonian sun which includes running, swimming (I guess goats can swim after all) and sprinting. 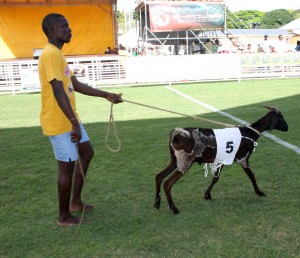 The jockeys are young and athletic and the goats have owners who may own an entire roster of racing goats and sometimes even corporate sponsors.  There are classes of goats too, from A to C depending upon how many races the goat has won. Prizes are no joke either with some prizes totaling several thousand TT (a thousand U.S. or more).

During race day, over 3,000 locals and tourists attend the races, which also generate somewhat of local media frenzy. Indeed, I had to get special permission to shoot video of the races. I felt like I was dealing with the National Football League or Major League Baseball for a minute. But after meeting Winston Pereira, who in addition to being in charge of this year’s festivities also runs the local Miller’s Guesthouse, we were able to work things out.

In addition to goat racing, they held a crab race to break things up and get some of the tourists involved. Both inside and outside the complex, there were all kinds of traditional Tobagonian food being cooked and sold (including crab, not sure if you could eat the losers).

The races lasted until sunset, when the racetrack lights had to be turned on for the big grand finale. After all the trophies and prizes had been distributed, the massive street party and concert began.  I had secured a room at the Seaside Garden Guesthouse, and while it was super convenient and right in the middle of all the action, the problem was, it was right in the middle of the action.  Trying to sleep there that evening was like trying to sleep during the middle of a concert at Madison Square Garden. I was pretty sleep deprived and am not a big partier, so I walked about ¼ mile or so to the edge of town to the hostel Fish Tobago. The owners were kind enough to cut me a deal on a bed for the night. I slept like a baby, oblivious to the extreme partying going on just down the road.

Aside from the beach, snorkeling, goat races and Sunday night parties, Buccoo is a nice little village where you can get to know the locals if you stay long enough. But they are somewhat jaded by tourists and some people may be quiet ambivalent about your presence.

Buccoo also lacks some infrastructure such as a good selection of restaurants and Tobago in general suffers with transportation infrastructure issues. If you don’t have wheels, just getting to and from Buccoo to nearby Crown Point is an adventure unto itself.

Miller’s Guesthouse has an excellent restaurant with breathtaking views of the bay. Eating there is very tranquil and relaxed and they have excellent food along with my favorite amenity; free Wi-Fi (evidently the rest of the island of Tobago didn’t get the memo that Wi-Fi is free for travelers almost everywhere else in the free world). While the food is really impressive, eating there for every meal can get a little expensive if you’re on a tight budget.

On Sunday night, some locals cook up a nice meal under a tent and you can load up on mahi-mahi or jerked chicken and other local favorites, but it’s going to cost you $15 U.S. 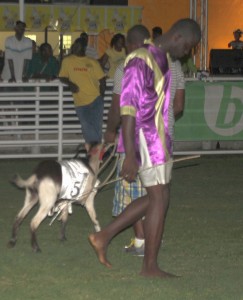 Buccoo’s beach itself is good if you like to be away from other travelers. There were times that I had the beach to myself. But there are many other things to see while on the island of Tobago, like the National Forest Reserve, the well preserved Fort King George in Scarborough, the much more commercial beach at Pigeon Point, surfing in Mt. Irvine Bay, diving in Charlottesville, etc. etc.

But if you’re looking for a more remote getaway without a bunch of other tourists around or if you have wheels (they drive on the left side of the road, btw) and just need a good home base, then Buccoo Bay is a great spot. Unless of course you go during the big Sunday School Parties and Goat Races and would actually like to sleep!