What I knew about Laos before arriving by plane from Thailand, could fill a sticky note, the little ones. And that info had largely been acquired vicariously through the travel of a friend who had visited the year before and on the plane ride over.

I’ve said it before research to Southeast Asia was hampered prior to my visit by personal, familial and work issues and commitments. I simply had no time to research. 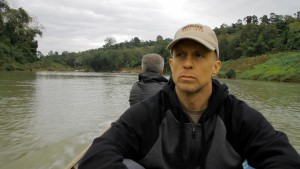 Luckily, my cracker jack production crew did. Erica, our producer on this trip, tried as best she could but Laos is a bit off the grid when it comes to the web. It’s simply not as advanced as it’s neighbors Vietnam & Thailand in terms of tourism infrastructure. Therein, of course, lies it’s charm.

From the capital city of Vientiane to the more touristic and temple laden Luang Prabang and everywhere in between, I simply fell in love with largely rural, laid back Laos. Traffic was light but even in the towns and cities where it could be jammed, horn blowing was unheard of. It’s simply uncool to lose your cool in Laos. I needed this place and the memories fuel me daily in a polar opposite spot like New York City.

The roads were difficult to traverse and windy and full of pot holes, making for some nauseating multi-hour trips in packed vans. It built character. 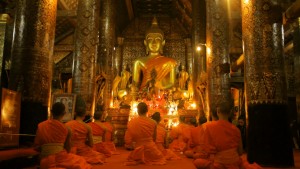 Just when we arrived to Vang Vieng, Mother Nature decided to mess with us by raining for almost the entire time we were there, which I was told was unheard of during the dry season and  specifically why we’d waited until January to film in Southeast Asia.

We’re used to dealing with the unpredictability of the weather but in Vang Vieng, it’s pretty much outdoor adventure sports capital of Laos and the main reason to go, thus all our planned activities revolved around being outside.  I don’t like being wet but I get even more annoyed at rain when worrying about expensive electronic equipment that was needed for the remainder of the trip. Our pals Vong from VLT Natural Tours and his British ex pat buddy, Brian helped us immensely and I’d like to shout them out.

Plastic rain ponchos were re-purposed as camera covers and we carried on thanks to the help of incredibly helpful locals and ex pats. But it wasn’t just wet, it was chilly… and muddy. A couple of days filming in those conditions and you feel you’ll never be dry again, but alas the sun came out, as it always does and life carried on. 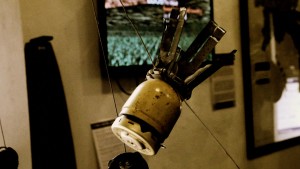 The Ho Chi Minh Trail runs through Laos and as a result it was the most bombed country in the history of warfare during the U.S. led Vietnam War and what was then termed the Secret War. The result today are tens of thousands of UXO (Unexploded Ordinances) that are spread over parts of Laos that create a very dangerous condition for Laos children.  Many have lost lives and limbs and are still doing so, thanks to this brutal lethal legacy.

We visited the highly regarded and informational Cope Center in Vientiane to learn more and it was life altering. I love my country (the U.S.) and recognize things are very, very complicated and not as black and white as many will have us believe, but this visit to the Cope Center opened my eyes to the horrors and long lasting effects of war, especially on the innocent. It’s a travesty of our very existence as humans. 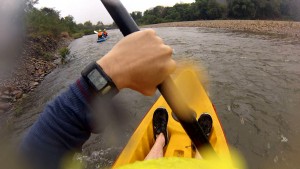 But most of our trip was simply heart warming adventure. Luang Prabang was one of those spots that is magical and was made more so because of our pal Alex at White Elephant Adventures (no elephant tours with these guys though we did meet some on our journey). Alex spent 2 days with us in and around Luang Prabang and took us to one of the schools they had helped build for a rural village just outside of town. WEA had recently constructed a dorm for the school meaning that the students didn’t have to sleep on the ground in huts that leaked rain and had scorpions, bugs, etc.

Meeting the students and seeing what real tangible good can be done in a place like Laos was truly gratifying. 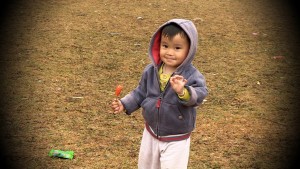 Alex, the owner of WEA, is another big-hearted British Ex Pat who was beyond generous with his time and went out of his way to show us (as he does other travelers) an authentic side of Laos that takes into account the livelihood and culture of the locals. WEA is a great example of how important it is to include locals directly in the economic rewards of travel and tourism.

Alex spirited us off to a friend of his in a nearby village to enjoy some freshly prepared Duck Blood Soup and to witness how a typical Laos family lives.

Some may get upset with me when with the killing and preparation of a cute duck to make duck blood soup. But the reality is that this is how people live and to pretend otherwise is not only disingenuous but in my opinion silly. There are no factory farms in Laos and our good duck friend had a relatively nice life running around the village foraging for food before meeting his fate. Not everyone can afford to be so picky about their dietary choices, not yet. 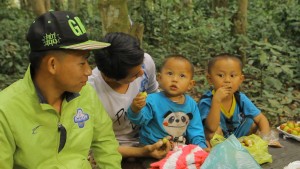 Still, I don’t like killing or harming animals and in general, I’ve again considered cutting meat out of my diet altogether, in part from these experiences I’ve had in Southeast Asia where almost anything that moves is fair game (but nothing goes to waste).

It’s just not my place to judge people who don’t have even close to the availability of food we have in the west.  Which may explain why I didn’t see an obese Laos person while there.

But they did seem happy, laid back and genuinely sensible in their approach towards visitors. Not overly ambitious to separate us from our money, but not ignoring us either, it was a perfect, almost zen like balance.

If you are in Southeast Asia, you simply must give Laos a go. 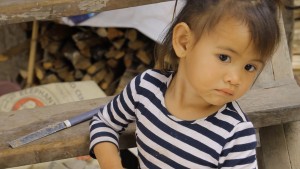