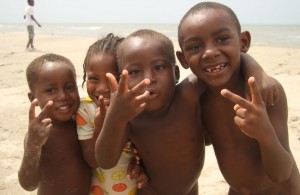 Coincidentally, the evening before the big earthquake in Nepal, I watched Vice On HBO’s report on the confounding money pit Haiti has become after their devastating 2010 earthquake (below is a debriefing by Vice Reporter, Vikram Gandhi).

Like many who’ve donated money to Haiti, the report was beyond frustrating to see. Unfortunately it is not surprising.

I kind of had the feeling that this would happen. The fact that private U.S. companies are benefiting with millions of donors’ and taxpayer dollars while providing nothing of substance to the Haitian people hammered home the surprisingly difficult task of giving, especially when large, self interested bureaucracies like the U.S. Government, United Nations and a struggling third world government like Haiti’s are involved.

When we’re on the road filming up against intense deadlines in a country we’re often not familiar, The Giveback  segment is often the most stressful of all segments we produce.

My biggest fear is giving media credibility and valuable exposure to an individual or organization that is  a sham, scam or simply dishonest. There are so many so called “not-for-profits” that are set up with the sole purpose of making money by securing funds with little or no resources actually going to those in need.

On more than one occasion we’ve walked away from a filming opportunity because something didn’t feel right. Unfortunately, this is a horrible gauge of whether to help or not, but with scant research available in many of these destinations, we do the best we can and rely on what we see when there on the ground. So far, I don’t think we’ve made any mistakes, but that doesn’t mean it won’t happen.

Large, well funded organizations with slick websites and marketing plans can give the impression of stability, security and goodness of mission. But as we’ve witnessed and the Vice reporter underscores, this can be misleading.

That is one of the reasons we encourage DIY (Do It Yourself) Voluntourism and working with smaller, lesser known organizations run by locals. When there is less money at stake, there seems to be less opportunity for graft, corruption and waste.

Further, I feel our exposure has a larger relative impact and viewers who decide to help may get a more visceral feeling working with smaller organizations.

Our “Give Back” segments are less about the particular organization we happen to be highlighting and more about shining a spotlight on Voluntourism as a travel option in general. Viewers are encouraged to do their own research and get out there and do what makes them feel good. Giving after all is ultimately a selfish enterprise. We largely do it because it makes us feel good, but what a great way to be selfish.

This is not to say that all larger organizations are bad or corrupt. Unicef, World Vision, the Red Cross and dozens more like them are doing good work. We need these guys and we need to support them.

But we also need to ask hard questions and expect the right answers. What is happening in Haiti is a travesty of human greed and reflect the worst angels of human nature. But I know among all that misery, all that waste and disgusting display of capitalism disguised as charity, that there are people doing the right things and working hard to make a difference. I know because I’ve seen them and witnessed the results of their efforts first hand.

They, thankfully, are large in number even though it’s often maybe not a sexy story for the likes of CNN and other corporate media concerns.

We’re planning a trip to Haiti for our upcoming Season 3. We had every intention of going in Season 1 but then the earthquake hit and we weren’t established enough to handle producing in a disaster zone. We still aren’t. But if we wait for Haiti to fully recover then I fear we’ll be waiting a long time. Plus one of the main reasons for going is they still need our help.

In the meantime, I hate to say it but I’ve been thinking twice about donating to  disaster relief in Nepal, a place I haven’t visited but have every intention of getting to eventually (not to climb Everest but to get to know the people and culture).

That’s the tragedy of these things. The disaster capitalists rip us off in Haiti and then we’re hesitant to give the next time the need arises there or somewhere else.

But in the end I can’t let the perfect be the enemy of the good. I do believe most short term disaster relief through most large and reputable organizations does get to the  intended targets and without that help, disaster would be multiplied many time over.

Nepal needs help so I’m going to do it. I’m including links below to Unicef and the Red Cross and World Vision. Three organizations I feel comfortable with. I’m sure there are many more.

A good tool to reference is Charity Navigator before you give to some of the more established and larger charitable organizations.

If you know of other, reputable, on the ground organizations in Haiti or Nepal, who could use Raw Travel’s brand of help, let us know. We’d like to check them out for ourselves and if we like what we see, maybe give them a little exposure.

Vice focus on the greed and corruption of the bad guys and I’m very thankful they are.

As for Raw Travel, we’ll continue to focus on the good.