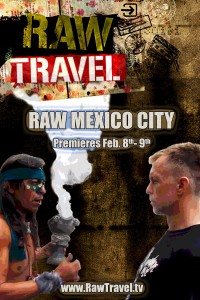 The adventure travel series delves deep into the culture of Mexico City uncovering the rarely before seen underground “rock-n-roll” flea market, El Chopo Market before heading out to take in a Lucha Libre wrestling match, sampling some chapulines (fried grasshoppers) and pulquerias (throwback fermented juice bars) then of course giving back by volunteering time to a group of special needs students; all while enduring an earthquake and a severe case of food poisoning along the way.

This weekend’s Mexico City episode kicks off a series of eight brand new, original episodes that were filmed over the summer of 2013. The Raw Travel crew began their journey in Mexico City and taped their land, water and air journey through Mexico and most of Central America before finally ending their eight week odyssey in Panama City, taping every step of the way.

“I’m proud of these new episodes. I think they represent an authentic look at how real people are traveling these days. In a sea of inauthentic “reality” content “Raw Travel” stands out as unique and audience reaction from our soft launch so far reflects that,” states Robert Rose, Host & Executive Producer of the series. “Travel expands the mind and the heart and this eight week trip forever changed us. My hope is that viewers will shake off the media stereotypes and be inspired to embark on their own adventure and get out and meet our neighbors, who are unspeakably hospitable & welcoming” Rose continues.

Future episodes will include never before seen looks into the burgeoning budget travel destination of Nicaragua, an alternative take on the Mexican Yucatan Peninsula, the magical, Mayan Guatemala, Tribal Honduras, the eco-adventure paradise of Costa Rica and an adventurous look at Panama.

The new episodes will also debut soundtracks from a variety of independent musical artists from around the world, many of whom were discovered while traveling. The page www.RawTravel.tv/music showcases the artists who contributed their music.

Raw Travel is an adventure travel & lifestyle series showcasing the rapidly growing wave of socially and environmentally aware, independent travel. The series weaves together themes of eco-tourism, volun-tourism (giving back) with underground music and authentic culture in a way unique to U.S. television.  More information at http://www.RawTravel.tv , Facebook.com/RawTraveltv, twitter @rawtraveltv