Two days without any solid food. Only liquids and even they don’t go down without a fight. Was it the fried grasshoppers? The questionable tacos at the local food market? No, we’ve narrowed it down to some Italian food in a very touristy restaurant in the Zocolo. Figures. It’s not the authentic food that gets you, it’s the very bad idea to have Italian food in Mexico. The culprit was the sauce.

But the cause is irrelevant. The result is a full day in bed. No shooting for me. Except for that one shot of me giving a standup (more like a “laydown”) from my sick bed. My crew is relentless and insistent that we keep things real. I acquiesced, reminded myself that I had long ago given up vanity when it comes to this project and somehow croaked out a few words about feeling bad and I can’t even remember what else honestly.

Yesterday was a blur. I rallied for the evening because we had a big, Lucha Libre match to attend where we were set to see one of the most popular and historic sports in Mexico. The taxi ride there took forever because of traffic (I know, I said traffic was  not as bad as I expected but when you are in danger of throwing up every other stoplight, any traffic is bad).

After what seemed like hours to garner permission to shoot, we were finally admitted entrance where the match itself was a spectacle. Lucha Libre has gone international and has a big following in the U.S. (very understandable given the immigration there) and in places like Japan (where there is virtually no immigration to speak of). In fact one of the wrestlers was from Japan and our guide and luchadore himself, El Kiss, told us of an  instance of 2 Japanese sisters who actually moved to Mexico City to follow their favorite sport. Now that is dedication.

The acrobatics of the wrestlers were phenomenal. Despite the testosterone atmosphere there are many female fans and there have been female luchadoras for decades, including one legendary luchadora who is still wrestling in her 80s! Now that too is dedication. 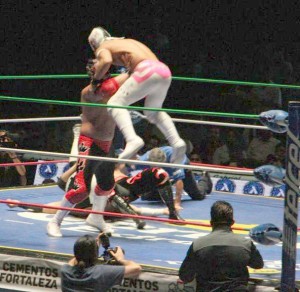 I momentarily forgot my extreme discomfort and got into the match. It was so tremendously fun and addictive that I’ll probably go again, sans camera (and hopefully sans food poisoning).

Today, I was allowed to sleep in and I tried a little breakfast, mainly fruit and yogurt. No good. It’s bizarre not being hungry for so long.  As diets go, the Moctezuma’s Revenge Diet is painful but damned effective. I’m pretty sure I’m down 5-7 lbs.

Today we hooked up with a local, Sitlali (an Aztec name), who took us to one of the most famous Pulquerias in town. Pulque are like  bars but instead of beer, wine or liquor, they serve naturally fermented juices. It’s a tradition that is gaining new popularity with the young, hip crowds of Mexico City.

We walked in at 2PM and it was jam packed like a bar in NYC at midnight. Surreal. After garnering permission to shoot (this time, very easy, big hats off to the waitress with the half shaved head and leopard spot tattoos) we sampled a few of the drinks. In the hot, crowded, noisy bar with sever stomach issues, drinking strange, fermented juices is a no-no, but I did it anyway. At one point I was sure I would pass out, but somehow, I kept it together long enough to put together what we think will be on of the highlights of the show.

Then we took the metro (subway) back to our hotel and as if by fate, it began raining, just as our shooting day had completed.

I took that as a good sign because I will be 100% honest when I say being this sick, while traveling is disheartening and gives me pause. It’s one of those moments when I question myself and say “why am I doing this”… “what is the payoff”? Why oh why didn’t I take an easier, safer route?

While those moments pop in my head from time to time, they usually pop out just as quickly. Once momentum starts to happen, it’s hard to stop something and I feel it with this project. It’s been picking up steam since January. But now all I want to do really, is eat solid food again.

Then I’ll be happy and life will be good again.

I’m happy and life is good again. I honestly forgot what feeling normal felt like. Now I’m ready to work out and rip the world a new one. Right after one more swig of Pepto (OK, I’m not 100% just yet but I’m close).

More importantly, I feel back on track creatively. Thank goodness for my dedicated and TALENTED crew Renzo & Moses. They know just exactly what to do when I’m unable to contribute 100%. The show is a true collaborative effort and I think we balance each others strengths and weaknesses out naturally.

Today, it was off to the pyramids and ancient pre-columbian city of Teothuacan. This amazing human accomplishment has been around since BC times and at one time housed 150,000+ people. The climb to the top of the tallest pyramid, The Sun Pyramid, is a workout and you need to rely on ropes along the way it’s so steep. At the top, the view was incredible (best we could muster it was 21 or so stories high) but we didn’t dilly-dally long at the top because it was cold, rainy and windy. I felt we had just climbed Mt. Everest or something.  I don’t typically do museums that often but the one at Teothuacan is a must see full of ancient artifacts and preserved skeletons from the burial grounds.

The next day the crew and I took some time to work with some special needs teens and adults in Southern Mexico City at The Integrated Center of Special Education school. It was raining and that cut attendance to 10 or so students but that was the perfect size for us. We were to teach them some recycling tips and how to reduce, reuse and recycle (they already knew quiet a bit so we were pleasantly surprised).

I’ve never worked closely with special needs people before and I was a tad nervous about doing it on camera. The last thing we wanted to do was come across as exploitative or glib. But literally after 5 minutes the personalities of the students began to assert themselves. There are no hidden agendas or politics with these guys, what you see is what you get. Omar was the class clown and he was hilarious, boasting 70 girlfriends and dancing a jig when some Mariachi music was played. It was Maria Jose’s birthday party and the staff and students invited us to cake and flan and we stuck around to help them celebrate.   They even gave us each a parting gift of beautiful lamps made of recycled glass. I just hope I can get it home after 8 weeks on the road. You could tell there was no shortage of love in the school.

In many ways these are the lucky ones. The Center is in a nice neighborhood and is a private school where parents of these kids can afford to pay the tuition. I thought of the many special needs kids with parents more like the majority of the Mexico City citizenry who have precious extra $s to spend on their care and attention. Who is helping them? How are they making it in the world? 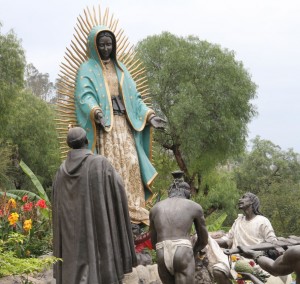 Next we headed by metro (Subway) all the way to the opposite end of the city (about 40 minutes by train I’d say), to the famous Basilica of Our Lady of Guadalupe, one of the most visited religious sites in all of the Americas, and for good reason. Here is where the apron of Juan Diego that shows the icon of Our Lady of Guadalupe is displayed. The Basilica is one of the most important pilgrimage sites of Catholicism and is visited by several million people every year. The gardens and smaller basilicas were some of the highlights for me, so tranquil and beautiful, a true oasis from the hustle and bustle of Mexico City.

We had to cancel a shoot later in the evening by a Mexican-American journalist who jerked us around all week and finally, eventually just cancelled (ironic that everyone came through but that the person with the “professional” resume acted the most unprofessionally). No worries. We’ve got a great episode for Mexico City in the can.  But like clay from the artifacts from Teothuacan it will need to be formed and shaped, pulled and formed.

But next, we switch gears completely and head to the the jungles of the Yucatan. Stay tuned for what are bound to be some tremendous adventures!