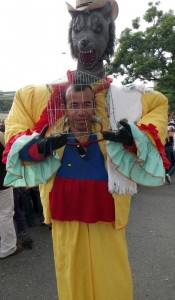 Each and every August,  Medellin  gets filled with tourists from all over Colombia and indeed the world as people make their way to the  famous Feria de las Flores (Flower Festival).

It’s a 10 day or so festive celebration of Medellin’s large and important flower industry that includes parades (desfiles), concerts, flower displays, contests and parties nearly every day of the festival, culminating with the incredibly colorful and grand Desfile de las Flores (Flower Parade) the last day of the festival.

Last Saturday, things got kicked off with the Desfile de Caballos (Horse Parade). Now I know that horses are very important to Paisa (people from the Antioquia region of Colombia) culture but I had no idea they were so prevalent.

Everything from packs of  mules to incredible specimens of well trained horse flesh were marching down the parade route. At times you almost got the feeling there were as many folks in the parade as watching it.

There had to be thousands upon thousands of horses and their riders making their way down the blocked off “autopista” (freeway) while thousands and thousands of spectators partied and took in the spectacle.

And not just horses, the Colombian military showed off their impressive might as well to an appreciative crowd.  While I know that not everyone feels this way, most of the people that I observed at least, seemed genuinely thankful for their military’s role in the marked reduction on violence the past decade or so in Colombia.

The parade lasted from 2 or so in the afternoon until well after sundown and the energy was entirely positive. Aside from a few well meaning folks warning me to be careful with my camera (already knew that), there were no issues other than the music was really, really loud and it was a little tough to converse without screaming your head off.

Those that could handle the rowdiness and partying a bit longer made their way over to nearby Parque Poblado and Parque Lleras which were as packed with revelers as I’ve ever seen.

Now I can only assume there were most likely jam packed until the wee hours the next morning because as for me, well, I need my beauty sleep these days and I wanted to save my strength because the Feria celebrations were just getting started.

I’ve posted a few photos here for your enjoyment but if you’d like to see them all be sure and check out the set on our FLIKR PAGE.

Stay tuned, this weekend there are even more parades so more photos and coverage to follow.