I felt like we’re preparing for a week long trip instead of a day trip to San Basilio Palenque. But not a lot of tourists do this trip, and it’s a little tough to get there in normal situations much less when it’s been raining for days no end.

After an early call time, we stopped back at the market in Cartagena to gather food for the Sancocho that Luis Towers’ (who is originally from Palenque) family was to make for us. While Luis and Renzo shopped for food, Moses and I stayed with the taxi driver in some skinny shade in the withering heat. We were so bored we started to shoot some more b-roll of the market.

We shot me risking death and injury crossing the busy street, we shot the fish hung up, the rooster tied to the top of a crate, young kids waving at the camera… you name it.

Finally Luis and Renzo made their way over with a couple of young kids enlisted to help them carry the food. We loaded it into the trunk of the little taxi. Renzo and Luis are big, tall guys. Moses and I are average size and the taxi driver is pretty small, but you add it all up, we have 5 people in a tiny, yellow economy taxi and  I’m sitting “bitch” (middle) in the back with a sack of food on my lap.

We determine we’d never make the 1 ½ taxi ride to Palenque this way so we decide it’s best if Luis goes by bus and meets us there. My cramped legs thanked him for his sacrifice.

We were all in heaven again with our own seat when Luis unloads onto the bus. At first since I’ve been in Colombia, we got stopped a lot by the military at different checkpoints along the way. Luckily our taxi driver’s papers were all in order so each delay is not entirely brutal.

When we finally arrive at the turn off for Palenque, Luis has already arrived (the bus beat the taxi, unbelievable), and there is a big 4 wheel driver cargo truck that will take us the rest of the way to Palenque as the roads are still a muddy, rutty mess from the rains.

We all, taxi driver included, climbed into the truck and made the slow, bumpy, muddy and slippery journey into town. Palenque is what I expected thanks to Renzo’s vivid descriptions of the place. It was founded well by escaped slaves from Cartagena.

The people who live there today are all direct descendants of this brave group of runaway slaves. There is electricity but I understand that it goes out a lot.

Luis’ family’s house is one of the nicer ones in town and it is where we set up camp to shoot and unload the food so the ladies could start preparing the Sancocho in the wood stove in the back yard. It’s hot and humid but I enjoyed getting to know the people from town.

There are lots of young boys and girls who were curious and came over to see what all the fuss is about. I was able to get to know a few of them as we shot.

I spent a little time with an expert on the Palenque language which is a unique dialect that combines elements of all the African languages represented in the village with Spanish. He taught me a few words, but considering I’m still having difficulty with Spanish, you can probably guess that my lesson was slow and painful.

I had even less success in learning the African drum, which is called the Alegre (a Spanish word for “happy”). I had more success eating the Sancocho whose delicious smells wafting through the house kept me motivated.

After lunch we headed over to the ball field where Renzo had brought some old bats, gloves and balls to give to the kids. They loved it! We played a few innings of baseball with palm leaves serving as our bases. The kids seemed unimpressed when I chased down a ball and helped get an out but these guys are hardcore baseball and soccer players. 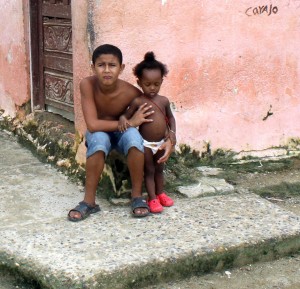 When it was time to head back, Renzo decided to stay overnight and catch a bus back in the morning. So Moses, the taxi driver and I were loaded back into the big Cargo truck who took us back to our taxi parked at a friend’s farm. The cargo truck charged us $15 U.S. for the round trip, which is pretty expensive but the only other options would have been  to hitch a ride on the back of a motorcycle trying to balance expensive camera equipment over really rough terrain. I think we made the right choice.

We were sort of in a hurry to get back, to be honest, but we shouldn’t have bothered. After we got into the taxi we were not on the road  for half an hour before traffic suddenly stopped and we find ourselves in the middle of a traffic jam on a bridge in the middle of nowhere.

There had been a trailer truck overturned in the marsh earlier that day and they had decided to pick that evening to get it out. Just our luck. We’d sit on that bridge with hundreds of other cars, buses and trailer trucks for 2 hours before we could start heading back to Cartagena. As hard as it was for us, I can’t imagine what it was like for all those people crammed on the hot buses.

I walked past a couple and heard screaming babies and it reminded me of being stranded on a plane for hours on end, except no climate control, no bathroom or beverage service and mosquitoes attacking you relentlessly. And while maybe the passengers could disembark on a bus, I didn’t see any do it. They say patiently, screaming babies, mosquitoes and all, for 2 hours.

Traveling in Latin America can really take some getting used to but seeing San Basilio de Palenque was worth it. The Afro-Latino culture is really unique in Colombia and they have their own unique history and culture that is worthy of exploring for the curious traveler. If you’re ever down in Cartagena, think about taking a day to go see the village of San Basilio Palenque. The roads will most likely be better and I think you’ll find the people very friendly and hospitable and the culture very worth exploring.