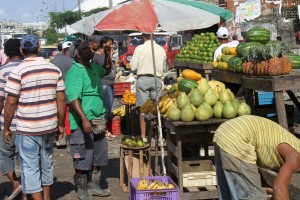 The weather the next day wipes out the planned trip to the beaches of Isla Rosario and we instead opt to shoot in the old city in between downpours.

If you’ve never been, the old city of Cartagena is gorgeous with lots of history. The city is walled in and protected by forts, streets are cobblestone and some architecture dates from as far back as the 1500s.

It has a tragic history as one of the centers for the slave trade in South America and still has a very strong Afro-Colombian influence.

It’s a good romantic spot too, very international with cruise ships docking for the day throughout the week, guaranteeing a steady stream of tourists for the locals to hit up. Unfortunately, this is the only downside to visiting Cartagena, you WILL get badgered to buy, buy and buy some more.

Just put on your game face and be prepared to say “no, gracias” a lot or you’ll be broke before you know it.

But on the flip side there are some great local artists, from painters to performance artists to jewelry makers and most things are not that expensive so do plan on getting some cool stuff for friends and family back home (or maybe yourself!).

We ended up getting some decent shots during the day while the rain held off. Without the cover of constant clouds, Cartagena became it’s hot and humid self, but after days and days of soaking rains we were glad for it.

Renzo, still sick, battled valiantly but had to call it a day after lunch so Moe, Luis and I continued shooting. We took advantage of our “freedom” from our Supervising Producer to try different techniques, he, he. But we’ll see how many actually make it to air and how many make it on the cutting room floor!

Luis shows us the major sites around town, but he couldn’t walk two feet without someone stopping him or yelling “Luis Towers” from a passing car. Dude is famous around these parts for sure.

We wound up the day right with a perfect sunset watching some African dancing and drums. Not a bad day at all.

Check some video of Afro-Colombian dancing below and to see more pics from our trip to Cartagena go HERE!