Thanks everyone for your donations and for buying the exclusive Raw Travel designed “Let Freedom Ring” T-Shirts and Pint Glasses based on my photo of Freedom Square in Kyiv that I took in 2019.

We’ve finally received the official “Let Freedom Ring” Coffee Mugs to Help Ukraine. We’re offering them in background two colors, white and light blue. The mugs sell for $17.99 (excluding shipping) and almost $10 from each sale goes to help the fundraising efforts of our pals at Keep Kids Learning who are not only keeping refugee kids learning by donating and funding school supplies but are also raising funds for medical supplies as well.

You can order yours at our special merch page

or if you prefer, you may also donate at our GoFundMe Page

I’m including below the latest update from Joseph there, who is planning a trip back to the USA to gather medical supplies, etc. to take back. I hope to catch up with him in person or by zoom. My trip to Ukraine has been delayed a bit until early June, but it’s still on.

Thank you for all your support once again!

As you might know, the areas we are starting these “pop-up” classrooms are located in the western region of Ukraine. Not only have IDP’s relocated from where the intense fighting is concentrated to cities like Lviv, Ternopil, and Uhzgorod, but also to the smaller villages. Recent attacks in the west have knocked out power in many places and our sister-site on GoFundMe – “Care4Ukraine” is beginning to address needs of IDP’s in these areas.
Many refugees are returning to Ukraine as the war drags on. Issues like the higher cost of living and separation from family takes it toll, and the choice to return begins to look better than being a refugee in a foreign country. It is now estimated that there are eight million IDPs in Ukraine, economic output is down more than 50%, and the conflict is growing more intense each day.

Thank you for your help. Joseph

ROB INTERVIEWS JOSEPH NICHOLS OF “KEEP THE KIDS LEARNING” FROM UKRAINE – Rob caught up with Joseph via zoom, while Joseph was making a quick trip to Chicago to pick up some medical supplies to take back to Ukraine.

UPDATE July 3rd, 2022 – I’ve just returned from filming in Przemyśl, Poland & Lviv, Ukraine. It was an intense shoot full of mixed emotions. We met many volunteers on both sides of the border, committed to helping Ukrainian refugees, including many Americans from places like Massachusetts, Georgia, Wisconsin, Michigan, California, DC, and more. We witnessed firsthand the great work organizations like World Central Kitchen, Unicef, and The Red Cross are doing.

I also witnessed first-hand the fear and trauma Ukrainians must go through daily as air-raid sirens forced us into bomb shelters at various times, day or night.

We met one particularly inspiring soldier, BMW (nickname), from the front, recently injured, who was thankful for American support. He was on injury leave. He’d recently had three fingers blown off by a missile attack near the front. He assured me his American donated flak jacket saved his and many fellow soldiers’ lives. His wife and children were with him. Their gratitude and his bravery were palpable. He was heading back to the front the following week.

I met several refugees. One recent arrival was a young man of 17, on his own for the first time in his life and seemingly unmoored. The rest of his family remained behind in the fighting. I think our visit cheered him a bit.

I met another from Russian-occupied Maritopal who escaped. Still, since his family remained behind, he couldn’t be on camera for fear of retribution. The stories he relayed to us off-camera (but with audio rolling were horrific).

We visited the famous Lychakiv cemetery in Lviv, where they’ve recently had to add a massive Mars Field to accommodate all the dead Ukrainian soldiers. This particular day was perhaps the most challenging part of the shoot. Here we witnessed grieving mothers, daughters, wives, girlfriends, sisters, and brothers at freshly dug graves. Tough.

But in the end, we saw a country and people committed to pulling together for victory. It wasn’t all grief, fear, and sadness all the time. Ukrainians in Lviv seemed committed to showcasing some sense of normalcy. There were street performances daily, with joyful people dancing, clapping, and singing.

I returned across the border on foot with thousands of Ukrainian refugee mothers and children escaping the war. We stood in line for 3.5 hours trying to get out of the country. I could get into Poland much more quickly because of my US Passport (in a matter of 20 minutes or so). Still, the poor Ukrainians had to stand out in the brutally hot and blazing sun for God knows how much longer to get into Poland.

On his day off, a kind Polish volunteer gave me a ride into town to catch my bus back to Krakow to catch my flight home (where Austrian Airlines promptly lost my luggage for almost a week).

Having caught covid in Paris and possibly breaking a toe or two (non-war related), I felt every bit of my age. Still, I would not trade the experience for anything. I was trying my best to figure out how to extend the trip to get to Kyiv as initially planned. Because I caught covid in Paris, I had to isolate and delay my trip to Ukraine by over a week. But alas, overland travel in Ukraine is slow and unpredictable. I had to be back in NYC to attend to business.

However, Anastasia, our uber-talented Ukrainian refugee Videographer, traveled onward to Kyiv to film a little and, most importantly, reunite with her mother, albeit briefly, before returning to Paris.

The unsung hero of the trip is the drone we brought from the USA to Ukraine that will help some Ukrainian soldiers surveil Russian troops more safely.

There’s a lot to tell, and we will tell more soon and in episodes in our upcoming Season 10 beginning November 2022.

HOW TO HELP NOW

In the meantime, please visit our MERCH PAGE or our GO FUND ME to donate to help us help the Ukrainian kids and people with medical and school supplies.

You can read more about our efforts below.

Raw Travel has deep connections in Ukraine, having filmed three episodes in Lviv and Kyiv in 2019.

Anastasia, our Ukrainian videographer, and her family are two times refugees, having already fled Donbas for Kyiv, and she and her younger brother are now separated from her parents, who remained behind.

In addition to Anastasia, we have several friends from Ukraine who are either exiled refugees or are serving their country fighting. Ukrainians aren’t the only ones drastically affected by this war.

Our musician friends from Russia who have helped craft music for Raw Travel are also refugees because they cannot return to Russia for fear of arrest.  They must also find a new country to call home.

We want to help Ukraine heal. We will be traveling to the Ukrainian border in June to film an episode focusing on giving back. The money raised on our Go Fund Me Page “Raw Travel Helps Ukraine” will focus on grassroots giveback segments in the show, which we hope will represent the Raw Travel ethos of socially responsible travel. 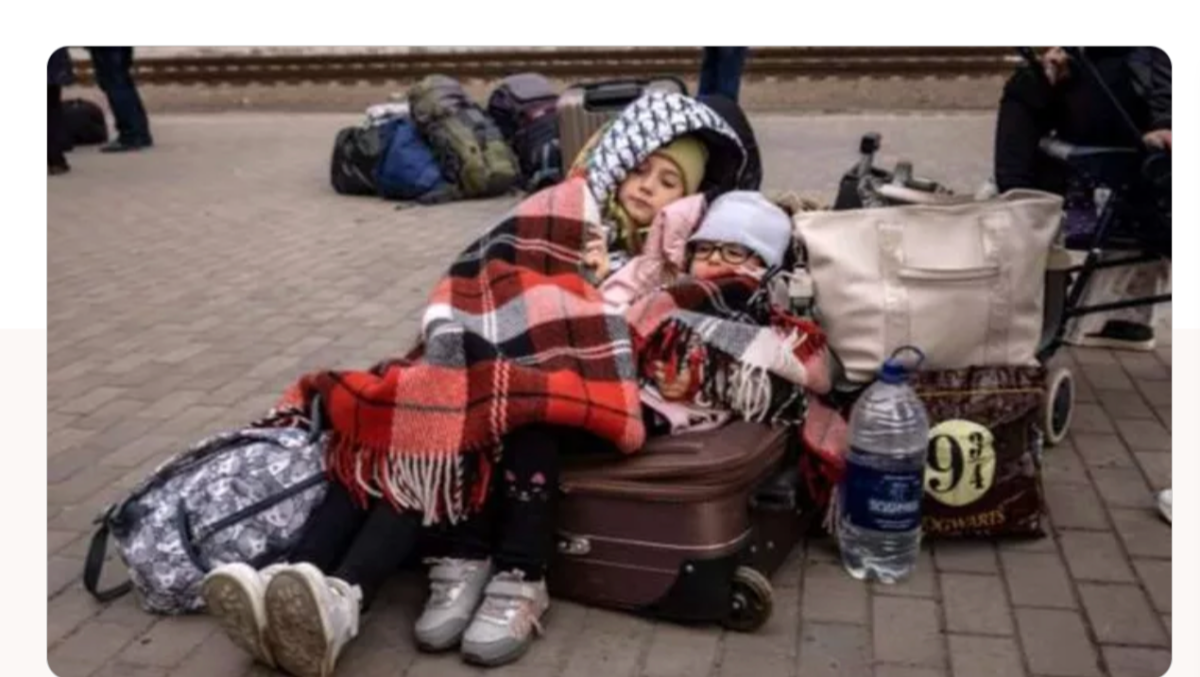 One of the organizations we have identified to work with is called Keep Kids Learning  – run by Joseph Nichols,  a US Citizen who has been working on engineering projects in Ukraine for eight years and teaching English.  You can find out more about their fundraising campaign here – Keep Kids Learning

There are other needs and organizations as well which we’ll be showcasing during our filming of course.  War is, of course, unpredictable but you can be assured that if we cannot film and use the money outlined above for reasons beyond our control, we will proceed to donate to a legitimate charity that we feel is best helping Ukraine. 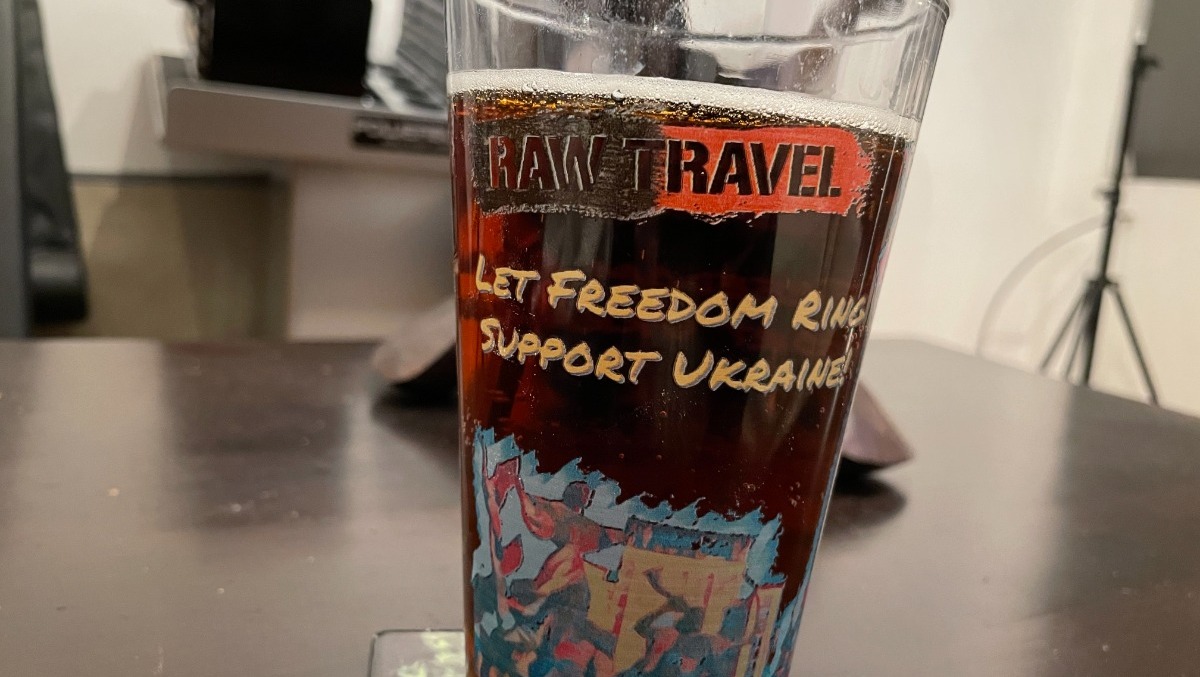 PINT GLASS – All donations over $50 are eligible for our Pint Glass or Coffee Mug with our exclusive “Let Freedom Ring for Ukraine” artwork, based on a photograph by producer Robert G. Rose at Kyiv’s Independence Square in August of 2019.

You may also buy directly at Raw Travel Merch and approximately $10 of each item (shirt, pint glasses, coffee mugs) will go towards fundraising.

If you donate through our Go Fund Me and would like to take advantage of the merchandise on offer, please message us directly there with your shipping address and we’ll order it for you.

Thank you for your support.  Stay tuned here and to social media for progress updates.

Unfortunately, regardless of when this war finally ends, there will likely be a need for humanitarian relief for some time to come. Please stay tuned to this blog and our social media posts for details.

God bless you and God bless the people of Ukraine.

This update is from Joseph from Care4Ukraine (Formerly Keep Kids Learning). As the situation on the ground is changing dramatically, so is the mission. He’s now switching to a more urgent need for medical supplies. We are hoping to meet Joseph in Chicago at the end of the month and roll with him in late May/early June in Poland/Ukraine as he continues his excellent work. Please stay tuned and please help him if you can. Below is slightly edited for brevity and clarity only – from Joseph sent the day Lviv had been bombed:

FROM JOSEPH – I am sure you know that Lviv was more directly impacted with a missile attack today. Normal kids “classes” will be cancelled today. A space was found in Ivano-Frankivsk and one in Uzhgorod along with a number of volunteer teachers.

There was a bit of growing complacency in the IDP population as the number of refugees returning from Poland has been increasing. The number of people returning to Kyiv and Chernihiv has been growing as well. This reverse exodus has been attributed to a sense of security, though regional administrations have been urging people not to return.

Refugees in Poland are having to deal with the sticker shock of EU prices, lack of housing, and the expected refugee fatigue that has begun to surface.

In the IDP population there are three camps that appear to have formed.

Based on what I’m being told, we can expect some very rough months ahead for Ukraine, and these supplies need to be place.

Rob caught up with Joseph via zoom, while Joseph made a quick trip to Chicago to pick up some medical supplies to take back to Ukraine.

UPDATE 5/21/22 – Here’s an update from Joseph of Keep the Kids Learning / Help 4 Ukraine in Lviv, Ukraine. Joseph is looking for school space and giving an update on how it’s the economy that is hurting most in non-heavy day-to-day combat locales like Lviv, Ukraine. It’s not just OUR grocery or gas bill that has gone up. Putin has singlehandedly wrecked the global economic recovery, and as usual, it’s the poor or vulnerable that suffer most. You can bet your depleted 401K’s last dollar that the world’s richest man (Putin, not Musk) won’t miss a meal. But good always prevails, IF we are willing, and we are aren’t we? That’s why we’re heading to Ukraine next month to hook up with Joseph and show you firsthand the good people he and so many others like him are doing. Thank you for your continued support. Visit RawTravelGiveBack.com for more information and thank you for your continued support.