While filming in Park City, Utah this summer I fortuitously came across a promotional flyer for a program called “Adopt A Native Elder” and was immediately intrigued. We made contact and interviewed founder, Linda Myer and her dedicated staff and volunteers at their warehouse in Salt Lake City where they were packing for an upcoming “Food Run”.  According to their website, the Adopt-A-Native-Elder Program exists to create a Bridge of Hope between Native Americans and other cultures.  They do this by providing food, medicine, clothing, fabric and yarns to help these Elders, some of whom are in their 80s and 90s or even older.

As they have become elderly, it has become more difficult for them to support themselves on the Land in their traditional ways. After my interview with Linda and Roger, the organization’s Navajo interpreter and ambassador, I was so taken with the program that I pledged then and there to participate in an upcoming food run. Months later, I was finally able to fulfill my pledge by participating in the Many Farms Food Run in a remote area of the Navajo reservation in Arizona and it was as amazing as I expected.

I flew into Phoenix on some business the day before and then drove almost 5 hours to the meeting point in Chimle, Arizona. I arrived late at night at the lovely Best Western hotel in town and woke up early to meet up with the volunteers and to get briefed at breakfast.

Linda immediately spotted me and after our greeting graciously asked if I’d brought any long pants (I was wearing 3/4 length pants). Luckily I had. It turns out the Navajo are conservative and to show proper respect, the volunteers are asked to dress conservatively with the females wearing long skirts and men wearing long pants. No sleeveless t-shirts either. The main thing is to keep oneself covered.

Linda introduced me to the group of volunteers as I nervously apologized for my inappropriate dress (an unintentional but now long running theme throughout the show),  and everyone laughed. It was a jovial, giving and welcoming atmosphere with approximately 50 or so volunteers from all over the U.S. including Utah, California, Texas, Indiana and at least one other person from New York City. It was a somewhat older adult crowd with many retirees taking advantage to give back, but there were also younger folks and families with kids as well as solo travelers in attendance. The kids particularly impressed me with their selfless attitude and commitment. In my view, these kids are bound for a lifetime of giving, empathy and betterment. I spent a lot of time with them and found their maturity and character at such a young age simply inspiring.

We left in convoy from the hotel and arrived at the gathering point on the reservation around mid morning before any elders would arrive, some making a several hour journey in from remote corners of the reservations and many arriving in walkers or wheelchairs, many of which had been donated. It was obvious that many rarely if ever are able to leave home but the ANE Foodruns are special occasion for these folks. Not only does the event allow them to stock up on food and other necessities to get them through the winter, they view these ANE occasions as social where they are able to fellowship and see old friends be they fellow tribes people or volunteers from ANE, many of whom have been coming for years and have developed long held bonds and relationships with the Natives.

Witnessing deep friendships that transcended generational, ethnic and cultural gaps was perhaps the most heartwarming part of the entire Food Run process

The elders were as sweet as could be and they and their caretakers (if they had them) of sons, daughters, grandsons, granddaughters, etc., were grateful and appreciative. Many of the elders did not speak English but as always, smile and a warm handshake or hug bridged any language or cultural barrier. Some of the Natives also brought gifts for exchange (rugs, yarn, etc.) giving the event a festive rather than charitable feel. 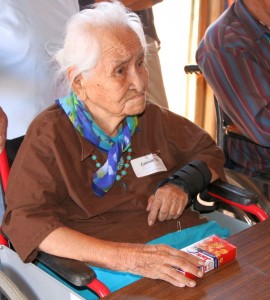 The ANE foodruns have been going on for over 30 years and by now, it’s run like a well oiled machine. Every possible scenario was covered and it was obvious this organization is a “waste not, want not” kind of place. The support that ANE receives goes directly to the native elders with very little administrative overhead that you would find in a larger organization.

They know by now the things that the elders most need. Items that might seem humdrum to you and I such as work gloves, knit hats, hand lotion, instant coffee, peanut butter, yarn, etc. Every elder is taken care of and every effort was made to create an event that was more of a celebration of a culture among good friends rather than a charity give away.  There were skits, entertainment, games and giveaways along with a wonderful buffet style lunch that was a mixture of Native and non Native food.

Indeed, it was hard for me to keep a dry eye during the parts of the day. The love and good will flowing from Native to Non Native and back was palpable. When the young Native children showed up for their toys, I thought I would lose it.  Simple pleasures from kids who don’t know a thing about a computer or video game but who were absolutely thrilled with a new plastic toy car or action figure that most kids in our country today would simply sneer at. The Elders.. the kids.. the volunteers… the love… the warmth.. in the peaceful (if hot and dusty) setting of the Arizona desert, it was surreal as well as a mind and life altering.

I hope I’m able to actually “adopt” a native elder or return on a Food Run soon and while it remains to be seen, it’s a memory I’ll treasure and keep for life.

I encourage you to find out about the ANE and see if it’s for you and if you are so moved, participate on a Food Run or Adopt-A-Native-Elder yourself. Please visit their website HERE and look for their segment in 2016 on Raw Travel. 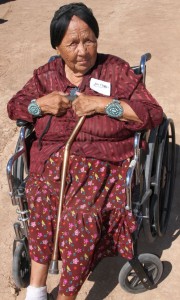