I love to travel because it jolts me out of that dull and unfulfilling zone and into a “wow” zone. And one reason I love giving back is how good it feels to take the focus off of me and onto someone else. Giving back is one of the most selfish things that one can do. What a lovely way to be selfish?

2020 has not been kind to travel, but it has opened the door to giving. Even in the world’s wealthiest nation (the US), people are suffering. But imagine the pain being felt in places suffering long before Covid 19 made it’s grand and morbid entrance.

As the 2020 holiday season limps along, it would be nice to shift away from a culture that discounts humans as consumers and allows us to humanize our neighbors once again.

On Raw Travel, we’ve profiled dozens of organizations doing good things in their little corner or chosen field of the world. I thought I’d list a few recent ones for you if you wanted to give to them in someone’s name as a gift this year. We’ve featured dozens, and there are so many more deserving than on this small list of five. But, since there are just five days of giving left before Christmas, I thought I’d limit the list to five. However, if you remember a particular “Give Back” that touched your heart and you’d like to give back in some way, please reach out on social media or email at RawTravel@aimtvgroup.com. We’ll try to hook you up with the best way to give.

This should probably go without saying, but obviously, any day is an excellent day to give back. Be it a birthday, holiday, or just a plain old vanilla Monday, giving can always make the routine day a joyous occasion. Merry Christmas and Happy Holidays!

2) FREEDOM HOUSE HAITI – You may recall our visit to Haiti and our work with Freedom House, an organization rescuing orphaned restaveks (child slaves) and raising them in a loving and caring environment. We’ve helped this organization raise money over the years. This year you can help by visiting their new fair-trade gift site at www.BeautifullyMadeFairTrade.com  . Freedom House’s USA main office is based in East Tennessee. Tennessee residents can take advantage of free 24-hour front porch pickup in Maryville, TN. Others can get delivery in 2-3 days. Find out more about Freedom House Haiti at https://www.facebook.com/freedomhousehaiti or their website at http://www.freedomhousehaiti.com/

3) CASA GUATEMALA – We’ve been working with this great organization since our first season during a brutal eight-week journey through Central America. When we arrived by river boat to Casa Guatemala by the shores of the Rio Dulce River, it was all worth it. We fell in love with the mission of Casa Guatemala. For decades now, they’ve been educating and caring for orphaned children in Guatemala and helping the struggling families in this rural region of Guatemala. We’ve been blessed ever since that fateful trip. It’s where we met our current cameraman/editor Nate, who was a volunteer at Casa Guatemala at the time we first filmed. Little did we know when we interviewed Nate getting his perspective as a volunteer that he’d one day join our team and go on far-flung trips with us to various corners worldwide. Nate is still with us, and Heather and the team are still doing their good work despite the challenges of Covid and Weather-related issues in 2020. Love these guys. It would be a great place to donate in a loved one’s name as I know the money goes to great use. Here is the link, https://casaguatemala2020.funraise.org

4) HUMANOS 3D / Formerly “Enable Medellin” – You will see these guys featured in early 2021 on Raw Travel – Socially Conscious Colombia, but I first met them in 2019. Despite having lived in Colombia for almost a year, I had no idea it was one of the world’s most land mined countries. The resulting number of missing limbs from kids and adults alike is mind-boggling. Humanos 3D uses cutting-edge, open-sourced technology and a network of volunteers to provide the coolest and most useful prosthetics for FREE to those who need them. You’re going to love this organization when you see them, but if you don’t want to wait until 2021 to help, here is a link to their fundraiser for 2020. I’m sure they can use the help, and I’ve seen first hand the joy brought to the hearts of Colombians who’ve suffered too long from the after-effects of a brutal civil war. Find out more and donate here https://humanos3d.org/en/about-us/

5) RED CLOUD INDIAN SCHOOL IN PINE RIDGE SOUTH DAKOTA: One of my most fulfilling episodes was filmed in the United States at the Pine Ridge Indian Reservation in Pine Ridge, South Dakota in the summer of 2016. Much has been documented about one of the poorest counties in the wealthiest country in the world. The gripping poverty, lack of housing, drug, alcohol, and sexual abuse have led to past epidemics of teen and pre-teen suicides on the Oglala Lakota Sioux Reservation. I was so happy we could show another side of that narrative.

We showcased an all too rare hopeful and optimistic vision of the reservation, which is happening thanks to countless volunteer organizations and the Oglala Lakota Sioux themselves. Red Cloud Indian School has been educating Native children on the reservation for decades. They’ve changed a lot over the years. Now the Lakota language and culture are cherished and taught. They have an excellent track record of sending students to major universities, many in the Ivy League. We raised money for the art program at Red Cloud Indian School when we sold Raw Travel, “Still here, still proud!” T-Shirts designed by a local art student on the reservation back in 2016. Education is the key to allowing proud folks like the Lakota Sioux People to pull themselves up out of the horrific cycle of poverty. Red Cloud Indian School is key to this success. Find out more and donate here. www.RedCloudSchool.org

Mother Nature got you down? Yeah, she seems kind of angry.

Well, here is something uplifting. In 2016 we visited the Pine Ridge Native American Reservation in South Dakota, located in the poorest county in the USA where the avg. male life expectancy is 48. Let that sink in.

The famous Oglala Lakota Sioux Chief Crazy Horse predicted that the 7th generation would lead a resurgent comeback for his people. They are here and It is now happening with Lakota youth at the Red Cloud School (where 95% of graduates are accepted into college) leading the way.

Here is a link to a short, but inspiring photo essay. https://www.theatlantic.com/photo/2017/08/a-reservation-restored/535656/#disqus_thread 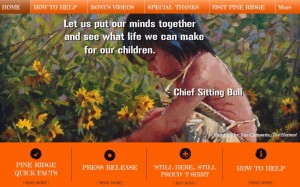 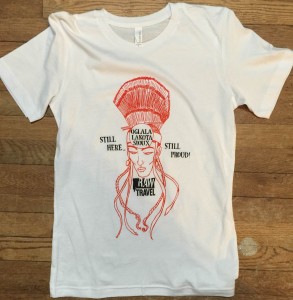 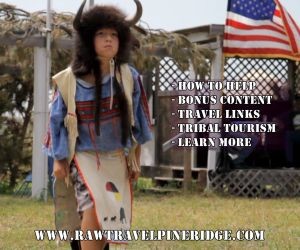